This Deleted Scene From Jurassic World Is One Big Pile Of....Well, Y'Know 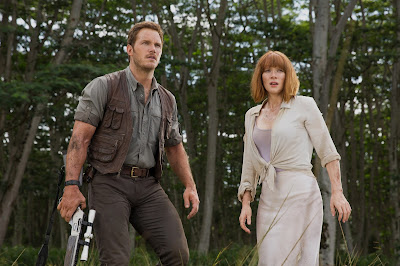 Last night, a deleted scene from Jurassic World began to take the internet by storm, and it's not hard to see why. This wasn't just a bunch of sites dedicated to cinema using the title of the biggest movie of 2015 to generate more pageviews, this was a scene omitted from the final cut from Jurassic World so utterly bizarre I can't imagine what compelled the four screenwriters attached to the movie (among them the features director Collin Trevorrow) to ever think it belonged in this thing.

The scene in question has been taken off of YouTube, but basically, it depicts Claire (Bryce Dallas Howard) and Owen (Chris Pratt) after they've set off to find Claire's nephews who are lost in the park. In order to avoid detection by the various dinos (some of which like to munch on humans), Owen suggests that he and Claire smear dinosaur feces on their bodies. While Owen simply gets some of the stuff on his arms, Claire covers her legs and chest in droppings. Her applying the stuff to her body is depicted in the same fashion lotion commercials depict women rubbing lotion on their various body parts i.e. in a manner that's meant to be alluring.

Continuing the tradition of the Jurassic Park films having at least one scene dedicated to dinosaur droppings (only The Lost World: Jurassic Park bucked this trend, though the rest of the movie was crappy enough to make up for that omission), this scene seems like one that would have sent the movies intense tone careening off into oblivion as well as continuing the entire features troubling gender politics. Claire can't just rub the crap (literally!) onto her arms like Owen, she has to do it in a weirdly seductive manner. It also appears like this scene attempts to establish the first time where Owen begins to rekindle his romantic feelings for Claire, and I'm not quite sure if this is worse than the way the final cut of Jurassic World handled the duos relationship, which culminated in a Man Of Steel-esque kiss while innocent civilians are being plucked by pterodactyls.
Posted by Douglas Laman (NerdInTheBasement) at 12:32 PM