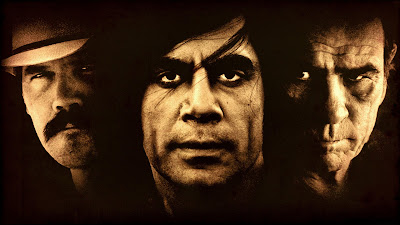 Many winners of the Best Picture Oscars see their reputations plummet after receiving such a prestigious award. The likes of Shakespeare In Love, Crash and A Beautiful Mind have become punchlines in the years since due to their being deemed the "unworthy" Best Picture winners by many pundits. One film that's managed to avoid such a fate (an impressive feat due to how much good cinema was released in 2007) is No Country For Old Men, a Coen Brothers effort that's overflowing with taut sequences of expertly crafted tension.

No Country For Old Men is one of those rare kind of movies that offers a little bit of something to any kind of moviegoing mood. In the mood for some sharp acting? Javier Bardem's star-making turn here will more than deliver. What if you're more in the mood for some excellent directing? Once again, you're in luck. And what about that sort of fellow whose yearning for some top-notch cinematography? Well, that individual can rest easy knowing this is one of the best efforts from a cinematography master, Roger Deakins.

This haunting and thoughtful motion picture airs on Starz Edge today at 9 PM Eastern time.
Posted by Douglas Laman (NerdInTheBasement) at 8:00 AM