"Guess The Wolf's Out Of The Bag": Journey Into Twilight: Part Two 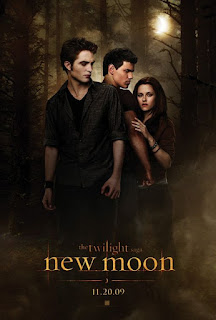 "Now what?" must have been a phrase on the minds of everyone involved in the first Twilight movie, as its far larger than expected box office proved that there was a massive audience for this property more than willing to shell out cash to watch an immortal murderer make goo-goo eyes at a woman nine decades younger than him. Well, there were four of these Twilight books, I guess it's time to get a move on getting those follow-ups made as films.

Director of the first film, Catherine Hardwicke, declined to return for New Moon, meaning the dribbles of legitimately good directing that cropped up in the first movie would not be returning, especially since they had snagged Chris Weitz to be the director of the second Bella Swan venture. This was the guy who handled The Golden Compass two years prior, a wretched attempt to get a new Lord Of The Rings saga going that had cratered at the box office. With Weitz back, the cast of the first one came back as well (though Taylor Lautner was almost replaced until he bulked up for the role), and the result of their efforts....is a snoozefest of a motion picture.

Weitz ditches the overwhelming blue hues of the first film, but otherwise, his visual approach to the movie is vastly inferior to Hardwicke's style, which at least tried to be competent. A weird sort of indifference that runs rampant in the feature can be traced back to the lackluster directing from Weitz, especially in the relentless use of a Zack Snyder-esque technique of slowing down, then speeding up more action-packed moments in the story.

Ah yes, the story of New Moon, which essentially boils down to Edward (Robert Pattinson) leaving, Bella (Kristen Stewart) grappling with the loss of her lover and finding solace in Jacob (Taylor Lautner). Her conflict of being torn between these two individuals will leave you overwhelmed...with boredom. Once again, Edward acts like a totally bizarre creation, constantly mumbling, eyes always locked on the ground and every line he spouts is some overwrought attempt to accentuate how Bella is all that he cares about in the universe.

Jacob, meanwhile, manages to accomplish the neat trick of always showing up on-screen without a shirt or distinctive personality. Why would Bella be interested in these guys anyway? They're both (especially Edward) creepy, neither have a personality that would be fun to be around, and if Bella is looking for something hunky and male, Jacob hangs out with four other shirtless buff dudes, just choose one of them. Maybe they won't act like a distant jackass like Jacob, a character given only momentary screentime in the first movie and here given the plot twist of being (SPOILER ALERT) a werewolf.

Having Jacob suddenly become a werewolf is pretty much the reason this entire film falls apart, as it means this film basically follows every story beat of the first one. Bella falls for a dude whose secretly a fantasy creature, said dude tries to distance himself from Bella to "protect her", cue Bella having angst and then she and the fantasy dude actually start going out anyway. The only difference here is that Edward soon reenters the picture and that's where the whole love triangle thing comes in. That unique aspect only gets a modicum of the screentime in New Moon, with the rest of the motion picture concentrating on recycling the plot of the first film to far worse results. And remember, the first one wasn't exactly a Singin' In The Rain level masterpiece itself.

At least setting the finale in Italy allows for a different set of scenery, though the location doesn't get used to its potential since the majority of the time the characters are in Italy they're cooped up in a cathedral-esque place with a hammy Michael Sheen and Dakota Fanning. Allow me to take this moment, as an aside, to just say that my favorite character in this whole franchise is Alice Cullen (Ashley Greene). She's so nice to everyone (except Jacob, which I understand), and it's wonderful to see someone display actual kindness in this wasteland of mopey and/or brooding characters. She's the only one in The Twilight Saga: New Moon to have a pulse, which I know is a tough thing to have when you're a vampire, but it still doesn't excuse this whole movies slapdash quality and pathetically slim characters.
Posted by Douglas Laman (NerdInTheBasement) at 2:36 PM