Pirates Of The Caribbean: At World's End Review (Classic Write-Up) 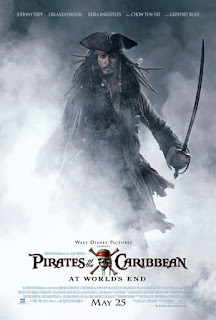 And so, we come to the end of the original Pirates Of The Caribbean trilogy, with At World's End closing out the four year long tale of Jack Sparrow, Will Turner and Elizabeth Swan....at least until Disney decided to go back this world for the dire fourth movie. By contrast to the second movie being far worse than I remembered it being, this third entry in the saga is surprisingly much better than I remember it being, even if it still suffers from an overly convoluted structure that the second film similarly struggled with.

Speaking of Dead Man's Chest, watching this third film, I'm absolutely shocked, despite how overlong it was, how few plot elements of At World's End are set up in its predecessor. The concept of Pirate Lords, the pieces of Eight, Calypso, all this stuff is dealt with in a rush manner at the star of this third motion picture, instead of being introduced in a more relaxed manner in the previous motion picture. Alas, At World's End has its opening scenes saddled with explaining more of this franchises pointlessly complex mythology for...., well, really there's no reason for a bunch of the concepts they introduce into this film to even exist, but I'll come back to that.

As the film opens, our heroes are off to save Jack Sparrow (Johnny Depp) from Davy Jones Lockers, a place that provides some of the films most absuridst imagery that's uber fun to watch. I have no clue how one of the most expensive films of all-time managed to get the sight of Johnny Depp attempting to get cozy with a goat into the final cut, but God bless 'em for doing so. Soon, Jack helps everyone get the Pirate Lords together, so they can work on a plan to fight the nefarious forces out to eliminate pirates from the very face of the Earth.

The concept of wiping out the innate concept of pirates from existence is central to the features overarching theme of advancing technology and societal ideas rendering pirates a relic from a no longer useful era. It doesn't play a huge role in the final scenes of the motion picture, but it's a thoughtful idea and one that lends certain sequences legitimate gravitas. If only that sort of thought had gone into the execution of the Pirate Lords, who end up taking up so much of the movies screentime without having a satisfactory role to play in the overall plot. After so much squabbling and back-and-forth political conversations, all of the other Pirate Lords just sit on the sidelines as Will, Elziabeth, Jack and Hector Barbossa (Geoffrey Rush) fight the final battle.

This sort of approach putting emphasis on creating a mythology over a cohesive story reminded me of Jupiter Ascending, another feature where the filmmakers were obviously in love with the world they created, to the point where it began to suffocate the characters and plot. Luckily, At World's End does manage to create some interesting characters during it's nearly three hour long runtime. While Will Turner is reduced to mainly being a recurring tattletale, Rush is having so much as Barbossa, it's hard not to get swept up in his joy. Plus, Elizabeth actually gets to do things in the story this time around! Huzzah!

Jack Sparrow and Davy Jones get the best treatment out of all the members of the cast, with Jack's suffering in Davy Jones Locker leaves him wanting to never die again, making the appeal of taking over Davy Jones post as the Captain of the Flying Dutchman (which would render him immortal) an attractive. Lending some tragedy to Jack's antics this go-around is much appreciated, and Johnny Depp does a solid job playing out the characters growth in the story. Davy Jones, meanwhile, is one of the individuals most affected by the idea of pirates going out of style, as he's now under the control of stuffy bureaucrats who make him anti-climatically kill off his beloved Kracken off-screen (it's delivered in as clunky of a manner as it sounds) and do all of their bidding.

It's great that Jones gets so much screentime in this installment, especially since he's got the most emotionally potent storyline to wade through. His old lover, Calypso (Naomie Harris), manages to figure heavily into the story of At World's End, opening all sorts of emotional wounds for Jones to sort with. A scene where he reunites with Calypso is probably one of the best in the whole trilogy, a quite moment where the amount of humanity Jones has lost over the years is put on display for all of the world to see, and damn if Nighy and Harris don't sell the hell out of every moment of their encounter. Why, Jones final, departing line to Calypso is enough on its own to break ones heart thanks to how Nighy delivers it.

If only the features other primary adversary, Lord Beckett (Tom Hollander) had that sort of depth, instead coming off as the New Coke to Norrington's Coca-Cola, an inferior version of something much better from the past. He's one of a number of aspects of Pirates Of the Caribbean: At World's End that doesn't work (among those elements is the conclusion to Will and Elizabeth's romance, which is hilarious in how on-the-nose it is), but when it works, it's quite the cinematic treat. Gore Verbinski still knows how to stage action and especially character entrances, the final climax in a whirlpool is exhilarating and a number of the characters are developed in interesting ways. There would certainly be better ways to wrap up this trilogy, but at least the ambitious Pirates Of The Caribbean: At World's End swings for the fences (and more often than not succeeding) in concluding this Jack Sparrow yarn.
Posted by Douglas Laman (NerdInTheBasement) at 12:45 PM