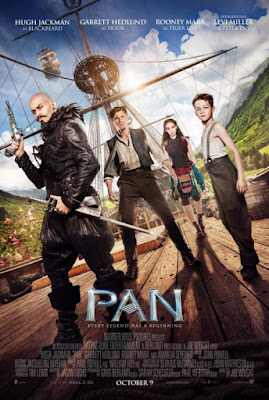 Perhaps the worst thing about Pan is how even its own flaws aren't notable enough to warrant fiery indignation or scorn. Oh it's got an immeasurable amount of foibles in everything from plot structure to acting, but it's hard for me to work up any sort of extreme rage or disappointment towards this particular project. This is a film whose story is written and executed in such a perfunctory manner that I'm surprised an actual human being oversaw this entire production. It feels more like a sterile machine just organized the various pieces into place hoping to strike up a newfound franchise in the process.

As the title would likely lead you to surmise, this is another adaptation of the Peter Pan mythos that got started by a book by J.M. Barrie, only this time, it's a prequel, showing how Peter (Levi Miller) got to Neverland, met Captain Hook, learned to fly, it's all in here. His origin tale begins at an orphanage in World War II, which is run by an overtly malicious adult authority figure that seems to have wandered off from a Roald Dahl book. It's not long before Peter and some other orphans are kidnapped by pirates, looking to add the children to their mining labor force, which scours for pixie dust (or Pixum as it's referred to in this story).

As Peter enters the mining area, we get the one singular sequence in the film with some sort of distinctiveness attached to it. The miners and pirates begin to sing the song Smells Like Teen Spirit, a song that won't exist for another 50 years, but does fit in with the mood of the scene. Why are they singing this tune you query? Well, both the pirates and miners are ruled over by Blackbeard (Hugh Jackman), the features primary villain. There's a surprisingly strong sense of pacing here, as the build-up to Blackbeards entrance and the growing intensity in the song merge seamlessly. After he enters the backdrop, Blackbeard then proceeds to list of his two main rules off the ear of a pig.

This is all such a bombastic sight to behold that I wish the film had gone for more of that kind of gonzo aesthetic instead of the cookie-cutter blandness that follows. Once Peter discovers he can fly, he's saddled with a Chosen One prophecy and from there the plot goes down every path these tales conventionally travel. Bruce Willis delivered his lines in films like A Good Day To Die Hard with more ingenuity than this movies script (which is solely credited to Jason Fuchs). Honestly, this movies lack of new or imaginative concepts becomes almost humorous in some spots, especially when James Hook (Garrett Hedlund) enters the story.  Yes, that's a younger version of iconic foe Captain Hook, only in this movie he's Pan's grouchy but helpful pal.

Hedlund looks to be asleep in the first half of the movie, and then when he pretty much turns into Han Solo in the very first Star Wars film midway though the movie (he even leaves the protagonists to fulfill his own desires before returning at an opportune moment in the climax), he's still a big o'l nothing in terms of on-screen presence.  Also; to whoever thought the romance between Hook and Tiger Lilly (Rooney Mara) was seriously a good idea....you're a cotton-headed ninny muggins. The two have zilch chemistry, fall for each other too quickly and have no reason in terms of the movies plot to be attracted to each other.

In between Hook's endlessly lacking charisma, the bewildering decision to make the Neverland Natives white while giving them artifacts like teepees explicitly linked to Native American culture and all the clunky references to numerous trappings of Peter Pan lore (crocodiles, a clunky line wherein Peter is called "...a lost boy", mermaids and a pointless Tinker Bell cameo all pop up in the movie), there are a few good elements poking out of the woodwork. Levi Miller makes for a solid lead and Hugh Jackman makes for an entertainingly over-the-top bad guy that I sorely wish got more screentime in the second half of this motion picture. And props to the set and costume people on this movie, the brightly colored trappings of the various nooks and crannies of this world do look pretty.
But those minimal in presence positives can't make up for how miserably lacking in creativity the rest of Pan is. Everything is done in such a monotonous and by-the-numbers fashion that it robs the motion picture of any semblance of energy. While it wouldn't have fixed every one of its problems, I feel quite confident that had Pan embraced more of its bombastic tendencies it could have at least been something more idiosyncratic than what we've gotten.
Posted by Douglas Laman (NerdInTheBasement) at 10:18 AM