He Named Me Malala Review 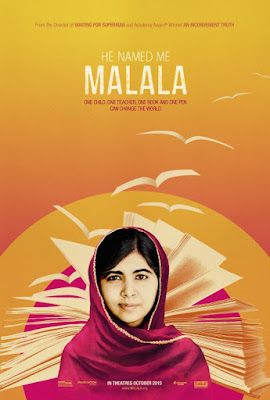 Bravery comes in many forms, and one such way that bravery has come into our world is by the existence of Malala Yousafzai, an activist for human rights as well as promoting the importance of women obtaining education. Her inspiring work has sent shockwaves across the planet, and the documentary He Named Me Malala examines the ups and downs of her life, both as an advocate for numerous human rights causes and in her own personal struggles.

That's probably the best part of He Named Me Malala, the way it gets into the titular characters head and depicts her inner turmoil. This is a woman who was a prime candidate for a Nobel Peace Prize in 2013 and received that award in 2014, yet she still has trouble accepting herself in social interactions at her own school. A scene where she speaks in voiceover about how she's concerned that her unique customs will prevent her from making friends is, to put it gently, moving. It's refreshing to see director Davis Guggenheim (whose past directorial works in the realm of documentaries include Waiting For 'Superman' and An Inconvenient Truth) forego a focus on sensationalism, instead prompting to examining what has made Malala and the other important figures in her life, namely her father Ziauddin Yousafzai, who they are.

In terms of structuring the film, there's a sublime balance between a chronological look at the growing influence of Malala's activism with depicting important events of the past that influenced her as well as taking the same approach with her mother and father. These flashbacks are presented in animated form, with a visual style that, to me at least, appeared reminiscent of watercolors. Not only are such sequences centered on erstwhile times lovely to look at from an animation standpoint, but there's a definitive point to each of these scenes being in the movie, nothing in these portions of the picture feels extraneous.

Of course, it's impossible to discuss the film without bringing up the tragic event that befell Malala in 2012, wherein a gunman attacked her and her friends by shooting three shots from a pistol, with one of those shots managing to lodge a bullet into Malala's forehead. It's a despicable act of maliciousness that the motion picture handles in a tasteful manner, depicting Malala undergoing physical therapy after the accident as well as an inspirational speech she gave after the calamity. The cowardly evil perpetrated against her won't stop her from speaking out for what she believes in and to say it's courageous to watch is a massive understatement

Above all else, that may be the most notable achievement of He Named Me Malala. This is a documentary that shines a light on the evils Malala is combating, many of which don't receive a tidy resolution in the context of this feature. By showing the horrors perpetrated against women who dare to better themselves intellectually, one understands the grand importance of what Malala is fighting for. I freely admit to not being as educated on this woman and her work prior to seeing this movie, but thanks to He Named Me Malala, I won't ever forget the towering feats and bravery she's displayed in her work nor the excellent motion picture that enlightened me on her advocacy.
Posted by Douglas Laman (NerdInTheBasement) at 2:25 PM