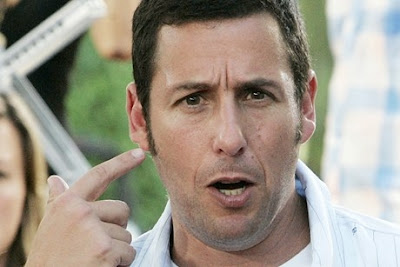 Netflix officially got into the motion picture business two Fridays back with Beasts Of No Nation, a critically praised feature which has been apparently viewed over 3 million times in North America alone. Their next foray into the world of cinema will be the start of their four movie deal with Adam Sandler, and the majority of the press over the first film, The Ridiculous Six, has been the abhorrent racism occurring towards Apache culture in the film causing several Native American actors and a cultural adviser to leave the project. Netflix is obviously hoping the conversation can now shift over to the movie itself with the release of the first trailer for The Ridiculous Six, which you can watch below.

Why was this played so straight-faced? There's a bizarre lack of jokes here, though rest assured, once "comedy" rears its ugly head in this trailer it's just as bad as one can expect from the director of Zookeeper and the writer of Grown Ups 2. It's also apparent they're proud of the cast they've assembled here considering how much focus cameos from the likes of John Turturro get in this trailer. Two last observations I want to make about this trailer before I move on; (1) Holy hell, Taylor Lautner looks aggravating here. Did you guys get that he's supposed to be the charming naive of the group? Did the buck teeth not give it away? Were they too subtle?? Also; Adam Sandler looks absolutely miserable in every frame of this trailer. Maybe he's as miserable with all of these garbage movies as I am.

Oh yes, I almost forgot...someone in Hollywood give Terry Crews a good movie to star in. The guys so funny in his Old Spice ads, Brooklyn Nine-Nine, pretty much everything he's ever popped up in. Why is he having to settle for this dreck?

The Ridiculous Six will be unleashed onto Netflix on December 11. If you need to wash away the taste of that terrible trailer, don't worry, I've embedded the newest Creed trailer below to remind you that there are films to look forward to in the final two months of 2015. You're welcome.

Email ThisBlogThis!Share to TwitterShare to FacebookShare to Pinterest
Labels: Adam Sandler, Beasts Of No Nation, December 2015, Netflix, The Ridiculous Six