Pirates Of The Caribbean: On Stranger Tides Review (Classic Write-Up) 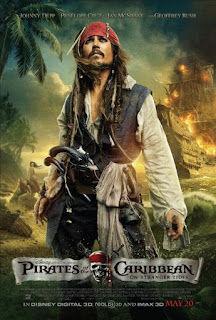 No one involved with Pirates Of The Caribbean: On Stranger Tides gave two shits about it. Normally, I'd refrain from engaging in the fallacy known as hasty generalization, but here, it's impossible to escape the deafening lack of vigor on display in everything from the acting, plot, action sequences, hell, even Johnny Depp as Jack Sparrow (so entertaining even in the weakest parts of Dead Man's Chest) feels more often than not tired in this particular adventure, which is not the sort of impression you want your zany and unpredictable leading man to convey.

For those hoping the overly cluttered storytelling style that hindered the last two films has been ditched, well, alas, that's not what happens here. A breezy Jack Sparrow solo outing just might have been the bee's knees in contrast to the two preceding entries in this franchise, but for some reason, screenwriters Ted Elliot and Terry Rossio are intent on sucking any semblance of the elegant simplicity that fueled that first film that feels like a strange anomaly at this point. Pointless characters, themes and subplots are tossed around like cannonballs in a duel between pirate ships, but none of them add up to a greater whole, with the numerous individual elements instead collapsing on each other to create one of the messiest blockbusters in recent years.

Jack Sparrow (Johnny Depp) is, as per the end of the third movie, still looking for the Fountain Of Youth, which seems to be continuing the characters obsession with immortality from the last movie, but any attempts to incorporate depth into the protagonist are never executed. Instead, Jack must team up with old flame Angelica (Penelope Cruz) and her father Blackbeard (Ian McShane) to find the Fountain Of Youth, while Barbossa (Geoffrey Rush) and some Spanish explorers are also hot on the trail of the magical item.

Perhaps the most perplexing thing about On Stranger Tides is that there is the potential for some interesting themes buried amongst all this garbage, but it's almost laughable how the film just tosses aside any opportunity to at all utilize the loftier concepts in its plot. Namely, there's a recurring presence of religion in the plot, with a clergyman named Phillip (Sam Claflin, and I'll return to his pointless character shortly) being held hostage by Angelica so he can redeem her father's wicked soul, while the Spanish explorers look to decimate the Fountain Of Youth because, in their own words, "Only God should have power this great".

The idea of the pirates confronting the concept of Western religion is a fascinating one, and could serve as a satisfying extension of the third movies theme of the entire concept of pirates being cast aside by the march of progress. Instead, the religion-fueled hatred that the Spanish explorers have for the Fountain Of Youth is only there to add more people sword-fighting in the films climax, while Phillip is saddled with possibly one of the most pointless subplots ever to grace the silver screen. For much of the second half of On Stranger Tides, he develops a romance with a mermaid, a creature depicted in the film as being more than capable of eating humans in a grisly fashion.

While it's easy to see why Phillip wouldn't want Blackbeard and his men to act overtly cruel to the creature, it's also stupefying that he actually develops a romance with this mermaid after seeing her kin devour a number of his fellow crewmates. Their love serves no purpose in the overall plot, though it does deliver shirtless Sam Claflin (which, when he's eye candy, is the closest he comes to having an articulate purpose in the entire film) and some unintentionally hilarious moments,, namely whenever Phillip chooses to name the mermaid Serena.

That may be the biggest problem with the structure of On Stranger Tides, as it just tosses all these characters and plot turns at the audience without giving reasons to identify/like/engage with said characters nor any sort of universal concept that unites the innumerable amounts of individuals inhabiting the story. The movies tendency to forego giving characters even the most basic amount of personality is exemplified in one of the films first extended action sequences, which depicts Jack Sparrow being chased by guards across London. Jack's the only character in this chase scene to even get a name, and there's not even moments of "cool" spectacle to offset the tedious characters. It doesn't help that Jack Sparrow, both in this scene and for the rest of the movie, is a meager leading man, with very few of his "humorous" moments landing and Johnny Depp looking more bored than anything else. Maybe he also missed the presence of Gore Verbinski, whose flourish for the grandiose is sorely missed here.

Instead, Rob Marshall takes the reins here, and while he's not out-and-out bad in his directorial work, it's shocking how banal the film is from a visual perspective. There were even a few moments that, especially in terms of lighting, look like they were lifted from a failed Pirates Of The Caribbean TV pilot. Despite being the most expensive movie of all-time, a title it still holds even when adjusted for inflation, this is one cheap looking movie, which at least means the production is consistent in its gung-go attitude towards putting forth as little effort into any task that crosses its path. At least the score by Hans Zimmer has some exciting parts, even if it's waaaaay too reliant on the now famous Pirates Of The Caribbean theme. And, uh, that's about it. I guess the always welcome Ian McShane wasn't bad, he did what he could with the script, though I personally found him to be more menacing in Hot Rod.
Posted by Douglas Laman (NerdInTheBasement) at 10:19 AM