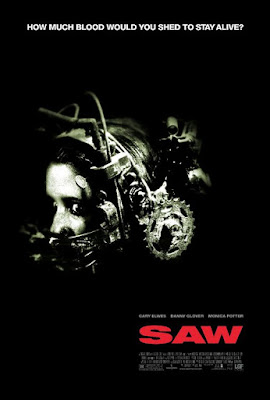 For a good chunk of the first decade of the 21st century, Saw had a firm grip on the realm of horror in pop culture. It's immense success spawned a number of imitators in the "torture horror" niche, namely the Hostel and Collector franchises. Such a subgenre faded almost as soon as it arrived, with the far cheaper to execute (no pun intended) found footage and supernatural horror fare managing to be the scary king of the multiplex in the years since the franchise concluded. And despite how prominent the franchise was for six years, there's been surprisingly little clamor for it to be rebooted or return to theaters, with the only attempt to wring more cash out of the franchise in recent years, a 10th Anniversary theatrical re-release of this first Saw film, bombing spectacularly last year.

Watching that particular entry in this franchise for the first time (having never previously ever watched an entry in this grisly Saw saga) was interesting, as, removed from all the hype that was to follow, this original Saw is a fairly simple endeavor. Like a number of major horror films that managed to change the paradigm of spine-tingling cinema (i.e. The Evil Dead, The Blair Witch Project, The Texas Chainsaw Massacre), this original Saw film was produced on a tiny budget that forced the filmmakers to work on a smaller scale story as well as being unable to execute the more grisly, over-the-top death sequences of the succeeding Saw movies.

That level of simplicity is actually one of the films best assets, as a large number of scenes are simply two dudes, Lawrence Gordon (Cary Elwes) and Adam (Leigh Whannell), being chained up in a room and trying to figure out who put them there and how to get out. There's an overwhelming sense of mystery to their scenes that are actually good at conjuring up scares, the slowly mounting uncertainty over whether they'll get out of this situation is certainly chilling to watch.

Frankly, the entire movie should have taken place in this environment, as scenes (primarily flashbacks) set in other locations aren't quite as successful at being either scary or interesting. Other traps, similar to the one Lawrence and Adam are trapped in, set up by the films antagonist Jigsaw (Tobin Bell), feel too over-the-top compared to the circumstances the movies two lead characters are caught in. And while Danny Glover gives it his 110% as a police officer turned detective obsessed with Jigsaw, his plotline is surprisingly extraneous when all is said and done.

James Wan, who would go on to do horror films like Dead Silence, Insidious and The Conjuring as well as the fifth highest grossing movie of all-time (Furious 7), already has signature "quick moving camera" trait down pat here, as well as a solid sense of building up tension in the scarier sequences that would serve him well in future endeavors like the aforementioned The Conjuring. It's easy to see why he would get future jobs after his directorial work here, as he shows a commendable amount of talent behind the camera even if the script written by Leigh Whannell could have really used more of the subtlety and restraint that marks the features best sequences.
Posted by Douglas Laman (NerdInTheBasement) at 11:21 AM