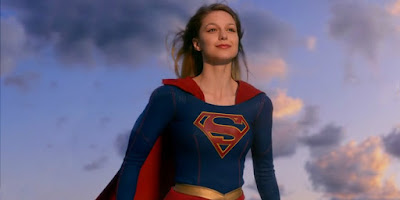 After launching Green Arrow and The Flash to their own individual TV shows, Greg Berlanti and Andrew Kreisberg have shifted their attention to getting a third DC Comics mainstay her own television program; Supergirl. While she's been a mainstay in a number of animated TV shows for years now, her live-action appearances have been limited to a recurring role on Smallville, her own 1984 solo feature film featuring Faye Dunaway and Peter O'Toole and a brief cameo in a segment in Movie 43 where she was played by Kristen Bell. Thanks to the massive marketing campaign they've given the show, it's fairly obvious that CBS hopes this new show will take her to the next level of pop culture recognition.

Time will tell if this program catches on with a large audience (the first episode will likely have huge ratings, though it remains to be seen if it'll act like that new Muppets show and plummet after its large series premiere numbers), but for now, this first episode does depict more than its fair share of promise. There are a number of kinks to work out going forward, but Kara Zor-El's first solo headlining venture in over 30 years is off to a solid start, no question.

I'm kind of shocked this show didn't warrant a pilot with a longer runtime, considering the large quantity of information this episode has to get off the ground in order to set up the show.  Our opening scene, depicting the end of Krypton and both Kara Zor-El (Melissa Benoist) being sent off the planet, has voiceover work courtesy of Benoist draped over it. This voiceover work serves as a way to dump exposition over the proceedings, but it's not really needed considering how much the visuals and actions occurring on-screen can speak for themselves. Remove the voiceover that suffocates the potentially emotional atmosphere of the sequence and things would only be vastly improved.

That's probably the most glaring problem with Supergirl, there's so much happening in certain scenes that it risks throwing the whole enterprise off the rails. Luckily, after that opening sequence, a more measured pace is incorporated into the show, as various characters (such as Kara's boss, Cat Grant, and co-worker Jimmy Olsen) are introduced in quick succession in a surprisingly satisfying fashion. It helps that these new individuals are inaugurated to the program via their interactions with Kara, and Melissa Benoist's terrific performance for the character is firing on charming cylinders from the get-go.

One interesting thing to note about Supergirl in this show is her desire to use her alien powers to help people despite dissuasion from her sister, Alex Danvers (Chyler Leigh). There's a great YouTube video from MovieBob, wherein, in response to David S. Goyers comments about She-Hulk (Remember those? Good times, good times...not really, the dude's an ignorant douche), he notes how a recurring trend in stroytelling throughout the ages to depict women with any sort of power as a bad thing (think Eve and the apple). In these tales, women typically misuse or abuse any sort of power they're given. In a way to upend that tradition, it's cool to see Supergirl's desire to use her superpowers for good treated as a positive thing within the shows world. Plus, it's fun to see Supergirl beat up bank robbers and an alien thug with a battle ax(!!!!!!!!).

Actually a montage sequence depicting Supergirl adjusting to new costumes and crime-fighting is the best part of the episode, The genuine enthusiasm Kara has for her powers makes the sight of watching her take down foes as well as developing her strengths an extremely entertaining proposition. However, the very end of this montage sequence introduces an element of the show that's the biggest victim of the episodes shorter-than-it-should-be running time. Suddenly, Supergirl is captured by the DEO (Department of Extranormal Operations), discovers this organization even exists and also learns her sister has been secretly working for the group all in the span of a few clunky minutes. Slow down there show! I actually like these characters, I want to get invested in their emotional plight, not speed by their trials and tribulations like a caffeinated hummingbird.

At least the existence of the organization does lead to them helping Supergirl track down a an axe-wielding(!!!!!!!) bad guy to fight in the episodes final minutes. Even with the limited budget that naturally comes with the realm of television, this duel has more emotional impact than anything in Man of Steel and also carries far more visual clarity. Sending off viewers with a well-executed extra-terrestrial brawl (and a cool "post-credits" tease), I'm actually quite interested to see where Supergirl goes next in future episodes, especially since all the heavy lifting of introducing this world and its characters has been accomplished. As long as the characters are interesting and Melissa Benoist is always this excellent, I have a hunch Supergirl is gonna fare just fine for CBS.
Posted by Douglas Laman (NerdInTheBasement) at 8:47 AM