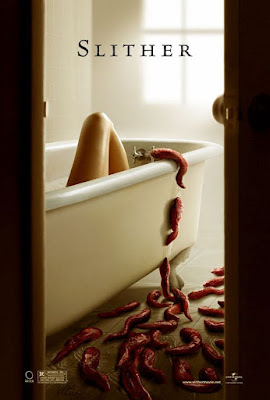 The single most important question you must ask yourself prior to watching Slither is the age old inquiry "Do I want to watch an extremely gory movie where extraterrestrial mind-controlling slugs lay waste to a small Southern town?" If so, well, Slither should more than satisfy, as it excels as not only living up to all the gross-out potential premise, but also in having some well-written characters and examples of strong acting from the likes of Nathan Fillion and Elizabeth Banks.

Starla (Elizabeth Banks) is a science teacher and wife to Grant (Michael Rooker) in the small town of Wheelsy, South Carolina. One night, Grant stumbles onto an alien parasite that infects him, turning the man into the distributor of various alien slugs that are determined to either consume other humans or take over their minds. It's up to Starla and local cop and longtime friend Bill (Nathan Fillion) to try to stop the invasion before it spread beyond their own small town.

Slither serves as the first directorial effort from James Gunn, an individual who, prior to this 2006 horror film, had been a writer on the 2004 remake of Dawn Of The Dead and both live-action theatrical Scooby-Doo movies, and in the years since directed Super, a segment involving a cat being sexually attracted to Josh Duhamel in Movie 43 (which reunited Gunn with Elizabeth Banks) in Movie 43 and a little known indie picture called Guardians Of The Galaxy. For being his first feature length directorial effort, Gunn shows remarkable chops in staging the gruesome sequences in order to ensure they get their maximum impact as well as composing shots that accentuate contrasting elements of tranquility and menace (I'm particularly fond of the shot showing the night-sky from a window above the character Kylie, and then one of the slug critters slowly crawling across the aforementioned window).

Like all but one of his directorial efforts (sans Guardians Of The Galaxy, which he wrote alongside Nicole Perlman), Gunn is the sole writer here, and he does a fine job giving members of Wheelsy, North Carolina some depth prior to the slugs coming out to play. Bill and Starla have a nicely sweet relationship that feels very genuine, if that makes any sense, especially in their more muted dialogue exchanges. By contrast, Gunn also goes delightfully whole hog in embracing certain horror movie archetypes, namely in allowing Gregg Henry to be the unpleasant mayor of the town. We all know he's headed for an unpleasant fate the moment he first he walks into frame, and Gunn has a ball allowing Henry to dive right into making this particular character come to enriched unpleasant life.

Oh yes, and there's also gross-out moments galore, aided by a refreshingly large number of practical effects popping up. Gunn takes a gleeful pleasure in allowing the chaos to continuously top itself, and one has to admire his devotion to depicting all the kind of twisted imagery he manages to squeeze out of this premise. Plus, he manages to work zombies into this plot (whenever the townspeople get controlled by the slugs they turn into shambling creatures resembling zombies) that help prove, once and for all, that modern day movies can incorporate slow-moving zombies and make them a menacing threat. Take that speedy zombies!

Compared to his future directorial efforts, Slither does lack some of the more character based underpinnings that turned Super and Guardians Of The Galaxy into gems, but that's honestly the largest complaint I could make out of it. Far from a movie that'll change your life, Slither succeeds in being exactly what it wants to be; an entertaining gross-out motion picture that would make the likes of Tom Savini proud. Prepare yourself to be disgusted (in a good way!), cover your mouth and enjoy the unique trip that is Slither.