Jem And The Holograms Review 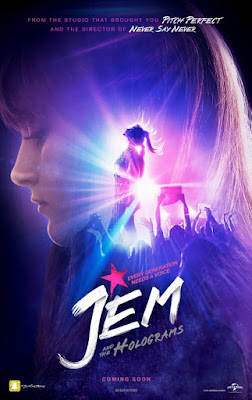 Man, has it been a good month for movies or what? Sicario, Steve Jobs, 99 Homes, Bridge Of Spies, just a top-notch line-up on modern day cinema. And then there's Jem And The Holograms. Going from those aforementioned high quality to the level of quality on full display in Jon M. Chu's latest movie is akin to enjoying a gourmet meal and then having someone violently shove 52 tons of expired Taco Bueno menu items down your throat. No, this movie is not good, in case that subtle metaphor didn't tip you off.

Based on a cartoon program that aired from 1985 to 1988 (which, full disclosure, I haven't seen), this movie mostly ditches everything from its source material in favor of a rote storyline that would be deemed too hackneyed for a TV movie on Disney Channel. Jerrica Benton (Aubrey Peeples) lives with her Aunt Bailey (Molly Ringwald), sister Kimber (Stefanie Scott) and her Aunt's two Foster children, Aja (Hayley Kiyoko) and Shana (Aurora Perrineau). When a video of Jerrica becomes a viral sensation, a sleazy music executive named Erica (Academy Award nominee Juliette Lewis) hires Jerrica and her sisters to become a new band: Jem, which will also serve as Jerrica's new name.

Will the life of the rich and wealthy cause tension among the sisters? Will there be some romance between Jem and Erica's beefcake son Rio (Ryan Guzman)? Was I wishing for the sweet embrace of death long before the movies insane 119 minute runtime was through? SPOILER ALERT: the answer to all these questions is yes. Look, going through a predictable story isn't necessarily a problem if the characters and situations a film creates are entertaining to watch. But despite a more than game performance from Aubrey Peeples (who you can tell is trying so damn hard to turn this lemon of a script into lemonade), no one in this movie leaves even a shadow of an impression despite the aforementioned excruciatingly prolonged runtime.

Despite them being the main emotional crux of the feature, none of Jem's three sisters can anything even remotely resembling development. Instead, they get basic "quirks" that are supposed to be...I dunno, endearing, maybe? Kimber loves social media so much that she has penchant for filming everything in her life, allowing the film to sporadically and pointless indulge in a "found footage" angle for cursory moments of the feature. Aja is a kleptomaniac and Shana loves fashion, and rest assured, none of these character traits pay off in the plot at all.

With it dropping the ball in pretty much every other department imaginable, the least Jem And The Holograms could have done was make some good music. Speaking as someone who loves P!nk, Taylor Swift and Carly Rae Jespen, the tunes belted out by the titular band are laughable at best. The best tracks from the likes of T-Swift manage to incorporate a vibrant sense of vitality in their lyrics.. Songs like Roar or Raise Your Glass managed to be both inspirational and fun to listen to, a potent mix that none of the tunes in Jem And The Holograms come even close to achieving. That blatant lack of quality in the bands work makes it all the more bewildering when the film makes a 100% earnest attempt at making the forgettable group an icon of inspiration for people everywhere in the features universe.

Oh, and on top of everything else I've talked about, you know what else is in this movie? A robot named Synergy. The only sci-fi element in the entire film, he was a creation of Jems deceased father, and once she and her band reach Los Angeles (the city where she grew up), the robot starts spouting holograms that send Jem and her cohorts on a National Treasure-esque hunt through two locations for extra parts of the robot. This little quest that only has a periodic presence in the plot is severely lacking an emotional thrust, as Jem wasn't distant with her father and her pops didn't die under "mysterious circumstances" or anything like that. Why the hell is she so motivated to go on this hunt? The movie never gives a proper explanation and then expects me as an audience member to be emotionally invested in Jem completing this pursuit. Shockingly, I found myself as uninterested in this specific subplot as I was with the rest of this cinematic haven of disarray.

As bad as that entire Synergy plotline is (and hooooooo boy is it shoddy), it's not the worst element of this films "story". No, the dubious honor for that "achievement" comes when the traditional "band break up" moment comes up. You know, that part in all these band movies where all the members of the group come to a head and depart. Here, after it happens, Jon M. Chu goes for some completely original imagery to depict Jem's inner turmoil by showing her shoving all of her makeup off a dresser and looking at her reflection in a fractured mirror. After that, she goes off to to stalk the family currently residing in her childhood home and then her three sisters and Rio pop up out of nowhere to forgive her. Basically, the band break-up lasts for maybe five minutes and has no direct influence on the plot at all. It's all so blatantly pointless, which at least means this particular turn of events is consistent with everything else one can find in this deplorable catastrophe.

I could spend another thousand or so words describing the numerous faults of Jem And The Hologram (namely, Erica has a bodyguard named Zipper who is never once told to "Zip it Zipper!!". CMON), but I think a brief personal anecdote should wrap up this cinematic autopsy nicely. Upon exiting the auditorium playing Jem And The Holograms, I ran into two janitors ready to clean up the theater. I looked at the duo and told them "Hey, I was the only one in the theater, and I didn't bring any food with me, so the only garbage in there is the movie".
Posted by Douglas Laman (NerdInTheBasement) at 2:45 PM