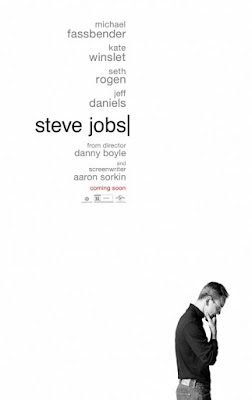 Now that I'm juuust old enough to put my younger years into a larger context, it strikes me that 2010 may have been one of the most formative cinematic years of my entire life. That specific period of 365 days brought out a number of important films that shaped me, including Toy Story 3, The Other Guys and the first Coen Brothers, Christopher Nolan and Edgar Wright films I saw on the big screen (hell, I could ramble on for hours on the personal importance of just Scott Pilgrim vs. The World!). Another film from that year that has cemented itself in my subconscious? The Social Network.


My passion for that David Fincher feature hasn't subsided in the half a decade since its initial release, which of course has led me to being extremely excited to see only the second script written up Aaron Sorkin (screenwriter of The Social Network) since the tale of Mark Zuckerberg graced my eyeballs that fateful October Sunday five years ago. While it's production had more back-and-forth than even the most intense game of tug-of-war, the wait was more than worth it. Sorkin's newest script, directed by Danny Boyle, has resulted in another gem called Steve Jobs.

While both The Social Network and Steve Jobs center on eccentric individuals responsible for great leaps forward in technology, their similarities end there. After all, the man this film is based on is so fascinating in his rises, his falls, his personality, why crib from the themes of The Social Network? there's plenty of dramatic potential to be mined from examining Jobs, especially in the three time periods that this particular feature concentrates on. The entire story centers on only three days in the life of Steve Jobs, with these days being when he "launched" a new product. Numerous years separate the individual days, with the first day taking place in 1984, the second going on in 1988 and finally 1998 being where the motion pictures comes to a close.

It's a unique structure for a motion picture, to say the least, but I'll be damned if it doesn't work like gangbusters, especially when it comes to the characters. The sort of narrow focus given to the days Steve Jobs life that the audience gets to see is also given to the cast, with only a few characters figuring into the plot. It's another risky choice that pays off, as it's great to see the simultaneous development and lack of growth that the individuals in this storyline endure at the hands of Steve Jobs. Mountains crumble, stars burn into oblivion, but no matter how many years go by, Steve Jobs is still the same man, for better and for much much worse.

Over the course of Steve Jobs coming to the big screen, it does feel like every dramatic actor in Hollywood was once approached to play the role of Steve Jobs once the top choice for the part, Christian Bale, departed the project. Leonardo DiCaprio, Ben Affleck and Bradley Cooper were all approached, and while Michael Fassbender might not be as much of a recognizable "star" as those guys, holy hell does he knock it out of the freaking ballpark here. In a lesser movie, I'm almost certain Jobs would have been reduced to just a bunch of neurotic ticks and emotionally unfulfilling quirks, but there's more depth in the way Fassbender approaches Jobs. You can see the pain hiding in the corners of his face even in his most unlikable moments and he makes the distinctive personality the real life Steve Jobs had feel human.

Like I said, with another actor, this whole role could have gone off the rails in trying to depict the peculiarities, the anger, the methodical nature, all of these aspects of the personality of Steve Jobs that he was well-known for. Fassbender gets those aspects of the character across perfectly, but does so in a nuanced manner that blew me away in its subtlety. While Fassbender has given plenty of great performances before (he was, of course, terrifying in 12 Years A Slave and was also excellent in one of this years most underrated movies, Slow West), but honest to God, this does feel like the kind of top-caliber turn that transforms an actor into a screen legend (i.e. Dustin Hoffman in The Graduate or Robert De Niro in Taxi Driver).

The titular character of the film also has a nifty little character trait deriving from Aaron Sorkin's script, which comes from a writer whose work over the years is famous at this point for its unique style of dialogue. I was curious to see how Sorkins modus operandi for conversations would fare in the film, but any concerns I had that it would distract from the motion picture itself turned out to be unfounded. There are some tremendous lines in here that I'll be quoting for ages to come, and to boot, this unique style of writing serves as a way to enhance the character of Steve Jobs. Sorkin's writing gives Jobs a unique dialect that serves as a verbal indicator of his idiosyncratic personality. All of the other characters in the film have to try to speak in a similar form if they have any hope of keeping up or getting through to him. Maybe it wasn't intentional, but that's how the dialogue resonated with me personally, and it's a clever way to turn one of the writers most distinctive traits into a way to further flesh out the movies lead character. In addition to his dialogue, Sorkins script also has a perfectly executed morose, regretful undercurrent to it that adds further layers to its lead character, especially in the final 1998-set segment of the film.

Surrounding Jobs at all times is Joanna Hoffman (Kate Winslet), and while she's nowhere near as nefarious as this particular Shakespeare character, she did remind me of Lady MacBeth in the way she was the only one who could corral and control the powerful man always by her side. Winslet provides a powerful sense of enlightenment when the film needs it, but she also makes her friendship with Steve Jobs feel equal parts frayed and resolute. And hey! Seth Rogen can do dramatic acting, and pretty damn well at that too. The guy more than holds his own in one-on-one scenes with Fassbender's prodigious performance, a monumental achievement that's on par in terms of impressiveness with someone achieving a perfect game of Pac-Man.

Danny Boyle brings over his visual prowess from Sunshine to Steve Jobs to provide numerous examples of inventive shot compositions and framing that ensure that the movies dialogue heavy nature never becomes a hindrance (it helps in this department, of course, that the script and acting are all in peak form). I honestly wonder what he feels like seeing the uber lackluster box office Steve Jobs has gotten domestically considering how much hard work he and the entire cast & crew put into this production. Hopefully he's aware that Steve Jobs has received glowing reviews, and I'll ecstatically toss my voice into that chorus of praise. This is a masterwork of a motion picture, one that delivers in spades on the storytelling potential its subject matter carries. Just as I remember a number of influential movies from 2010 clear as a bell years later, I can guarantee you I'll be remembering Steve Jobs for ages to come.
Posted by Douglas Laman (NerdInTheBasement) at 5:11 PM