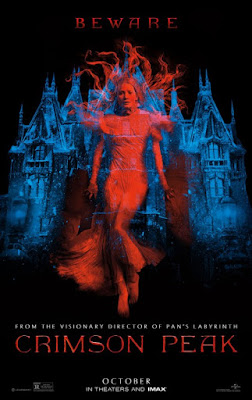 God bless Guillermo Del Toro. He's such a fascinating filmmaker, so obviously in love with the worlds he creates, it's endlessly charming. Also fun to see is how much variety there is in his filmography in terms of what genres he'll explore. Fantasy for Pan's Labyrinth, sci-fi for Pacific Rim, and now dramatic supernatural romantic period piece horror in Crimson Peak. That description may make the project sound like a hodgepodge of a creation, but don't fret, it's instead a delightful mixture that utilizes each of its distinct individual elements to their fullest potential.

Much has been said regarding the marketing for Crimson Peak and it's misleading nature, but I'm honestly not sure if the commercials for the feature are so much spurious as much as they're just trying to make the film look more like a fast-paced jump scare packed cinematic venture like The Gallows. In other words, certain ads, from my perspective, try to make the film seem more like a cookie-cutter horror film that has all the cliches of modern day scary movies, whereas the actual motion picture is far more reliant on a slow-burn approach that works like gangbusters in establishing our roster of characters and a uniquely unsettling atmosphere.

I could feel the audience members around me becoming restless as Crimson Peak gets started, with a large chunk of the story spent in New York in the early 1900's as Edith (Mia Wasikowska) attempts to get a novel published and dealing with the blatant gender double standards of the day. Here, the film resembles a typical period piece drama ala Pride & Prejudice, and not at all like, say, the gore-filled Saw. This portion of the story was more than fine by me though, even if it took me a few minutes to adjust to the unique dialect of the time period. In this section of Crimson Peak, as in the rest of the movie, one can immediately see how the directing is sharp, the actors are in fine form and oh my Lord, the costumes and sets! So colorful, so lovely to look at. If the Oscars snub Crimson Peak for all of its technical accomplishments just as they did for Guillermo Del Toro's last film, the criminally underrated Pacific Rim, I'll riot, because Lordy are the various radiant dresses and suits marvelous to look at.

It's fairly obvious that Del Toro is establishing a more tranquil environment that can be juxtaposed against the flashes of the more supernatural imagery (our protagonist can see ghosts, don'tcha know) Edith comes face to face throughout the plot. Such unorthodox entities particularly come into play when Edith stays over at the place of residence of Thomas Sharpe (Tom Hiddleston) and his sister Lucille (Jessica Chastain, in excellent scene-chewing unsavory form). Thankfully, the script doesn't take the task of setting up the more serene sort of tone in the early scenes of the movie as a way to allow the characters to become flatly developed. There's some dynamic chemistry between Wasikowska and  Hiddleston, who plays Thomas Sharpe, that's fun to watch, and it's similarly neat to see elements of this time period, namely the growing presence of mechanical machinery, work its way into certain plot points.

But for those wanting to see Crimson Peak solely on the basis of its scares, rest assured, the more terrifying moments in the film are exceptionally delivered. I love love love the pacing of an early scene where a supporting character is stalked by one of the films antagonists, there's an eerie uncertainty in every second that ticks by that's far more scary to experience than my middling description would make you think. Plus, the more scare-driven sequences are spaced throughout the movie, allowing each moment of blood-curling mayhem to leave its own distinct impact.

I've made it a point to emphasize the more unique nature of Crimson Peak in comparison to many modern day horror films, but even when separating it from the pack of scary features, Crimson Peak more than works as its own animal, one whose tragic overtones and incredible technical achievements are impossible to ignore. Oodles of examples of tragedy transpire during the running time of Crimson Peak, but it'd be a far greater tragedy if you don't experience this mesmerizing treat on the big screen like it deserves.
Posted by Douglas Laman (NerdInTheBasement) at 1:35 PM