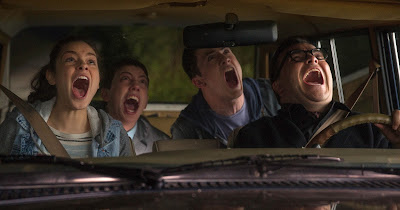 Yesterday, I lost my virtual reality virginity after hearing about the technology for years on end. Having never tried these virtual reality headsets before (I have watched 360 degree videos on YouTube allowing for the impression of virtual reality) before, I decided the Goosebumps Virtual Reality Adventure (which can only be found in 13 theaters in the US and Canada) was the perfect way to dive into this realm of storytelling, which Hollywood is determined to utilize (Disney, Annapurna Pictures and 20th Century Fox have made deals to make content for various virtrual reality companies).

The set-up for this experience is relatively simple; an individual is sat down into a D-Box chair, which is a special sort of movie theater seating device that moves around the audience member via shaking in accordance with the action occurring on-screen, and then places a virtual reality headset on their cranium. Then a short film that doesn't last for more than two minute occurs that has one in the passenger seat of a car driven by Jack Black as R.L. Stine. And wouldn't you know it, but the vehicle is being chased by a giant praying mantis, allowing for the D-Box chairs numerous opportunities to swivel the viewer around.

One of the most notable aspects of virtual reality is the concept of immersion, as this headset allows a person the ability to look around every nook and cranny of this environment. It's a neat idea in theory, but the extremely fast-paced nature of this experience (you are being chased by a praying mantis after all) means there's very few opportunities to take in one's surroundings. A more leisurely paced narrative could have at least afforded the possibility of taking advantage of the immersive aspects virtual reality offers.

Having such a "go-go-go!!!" stride in every frame of this experience makes this Goosebumps Virtual Reality Adventure feel like, more than anything else, a theme park ride, which is a venue that virtual reality may actual be perfectly suited for (I believe the forthcoming Avatar Land has some sort of virtual reality attractions in the works). Like a number of theme park rides, the thrills of this short feature are delivered with some humor, courtesy of Jack Black dropping some one-liners as he tries to outrun the praying mantis. For me at least, the best of his quips is his reference to how the praying mantis, which comes from a book his character wrote, attacking him is "...like Frankenstein's monster attacking Dr. Frankenstein, it's unnatural!"

Two quick things to close up my first ever review of a virtual reality experience; the first is that no one under the age of 13 is allowed onto the Goosebumps Virtual Reality Adventure. That's understandable given that the combination of the D-Box and the intense nature of the virtual reality film would likely be overstimulating to younger viewers, but given that the film its advertising, Goosebumps, is a family film, many of the individuals who would actually want to partake in this unique entity can't. It may be a better idea to use an older-skewing film as the basis for future virtual reality experiences. Secondly, after taking off the virtual reality headset, I found myself briefly discombobulating adjusting to the real world. I have no idea if this is solely because this was my first time in one of these headsets and that prolonged use of such objects means such discombobulation isn't a problem in the future, but I just thought I'd give a heads up so anyone who engages in the Goosebumps Virtual Reality Adventure won't be surprised to find themselves feeling momentarily woozy afterwards.
Posted by Douglas Laman (NerdInTheBasement) at 10:50 AM