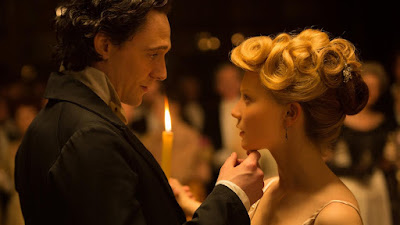 This weeks three new wide releases got their box office runs started last night, though it's hard to use their Thursday night numbers to foretell how exactly the films will do in the coming weekend for a variety of reasons. The largest of last nights performances was Crimson Peak, which grossed $855 thousand in Thursday night screenings. That's about 14% below the Thursday night grosses for Universal Studios most recent previous horror film The Visit, which grossed $1 million at these showings last month. It's likely Guillermo Del Toro's fanbase came out to see it last night, potentially making the film have a frontloaded weekend, though it's still too early to tell if that'll come to pass.


Right behind Crimson Peak last night was Goosebumps, which grossed $600 thousand. Comparisons are hard to come by for this one, since most family movies in the fall don't report Thursday night grosses (Hotel Transylvania 2 eschewed Thursday night showings altogether three weeks ago), though it does seem likely that the feature is in line for a solid opening weekend and may even give The Martian a run for first place at the box office.

Finally, Bridge of Spies brought in $500 thousand, which, as Deadline points out, is only 16% behind the Thursday night grosses for the October 2013 Tom Hanks led drama Captain Phillips. If Bridge of Spies had an opening weekend only 16% behind the one Captain Phillips had, it would make $21.7 million for the weekend. That may be a tad too high of expectations to put on the film, but it does look like there's a good chance the newest film from Steven Spielberg could squeak past the $20 million mark this weekend.
Posted by Douglas Laman (NerdInTheBasement) at 10:16 AM