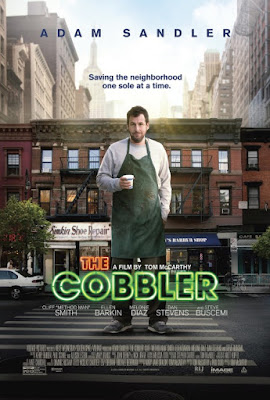 It wouldn't be shocking if the high concept premise of The Cobbler had been the story for a late 90's-early 2000's comedy starring Jim Carrey in the fashion of Liar, Liar or Bruce Almighty. Instead, it's the plot for not just easily the lowest grossing feature of Adam Sandler's career, but also a film that had the most anemic box office career of any movie in 2015 (it grossed under $25,000 domestically in an extremely limited theatrical release). Adding insult to injury, the motion picture was savaged by critics, and after finally seeing this infamous entity, I can now add my voice to the chorus of dissatisfaction The Cobbler has garnered.


Max (Adam Sandler) doesn't lead a very glamorous life, with his days being mostly comprised of helping various customers in his shoe repair shop and taking care of his elderly mother. Then, one day, he discovers a stitching machine with a magical gift; whichever pair of shoes Max fixes with the stitching machine, he can then put on and become the person those shoes belong to. Like I said, it's the sort of fantastical story Carrey likely would have starred in years ago, though it likely would have had more humor in it than The Cobbler has.

Now, for numerous Sandler vehicles, it's become customary to note how unfunny his comedies are, and while there are moments of levity that fall flat in The Cobbler, it's kind of shocking how straight faced most of the story is played. Instead, there are some surprisingly dark plot turns (primarily revolving around the criminal activities that supporting character Leon, played by Method Man, dabbles in) that don't gel well at all with the whimsical conceit that drives the film. To boot, there's a shocking lack of character development for Max related to this unconventional gift.

He doesn't grow or learn lessons via his various escapades immersing himself in other people's identities, instead using them for almost raping a woman (?!?!?!!?) and other similarly selfish deeds. Since there's no character development to serve as connective story tissue between the individual antics Max gets into, The Cobbler's plot gets nothing accomplished besides conjuring up one of the sloppiest plot structures I've seen in quite some time.

There's really no difference between the numerous characters Adam Sandler plays in the likes of Grown Ups, Jack & Jill and Pixels; they're all everymen meant to be the most useful/successful/coolest person in the house no matter the occasion. By contrast, it's almost shocking how bland Max is. I'm not even sure why Sandler was called up to play him, since there's no characteristic to be found in this protagonist here that even calls to mind what Sandler has played in the past. Always dressed in a coat and a scarf, Max rarely speaks above a whisper and always has a facial expression that lands somewhere between "exhausted" and "hungover".

Probably the only positive that can be drummed up for The Cobbler is that at least the directing from Thomas McCarthy (he's also a writer on this film, which obviously lacks all the wit and charm of his underrated 2011 effort Win Win) isn't abysmal. On the other hand, I have no idea what's going on with this script he wrote up, which, in addition to having middling characters and no sense of plot structure, is also mired in racist tendencies. But at least Steve Buscemi and Dustin Hoffman (what he's doing here is anyone's guess) likely got nice paychecks, I guess. Plus, the movie eventually ends, which may be its best attribute. 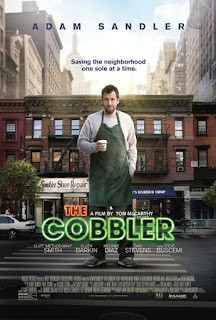 Posted by Douglas Laman (NerdInTheBasement) at 10:14 AM