Pirates Of The Caribbean: The Curse Of The Black Pearl Review (Classic Write-Up) 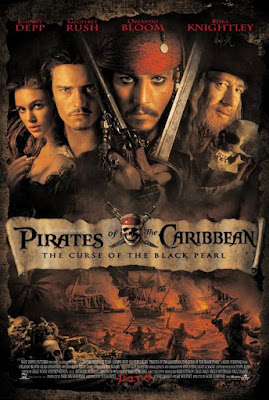 They said it couldn't be done. A live-action pirate movie in this day and age, and based on a theme park ride to boot?? Disney might as well be burning all the cash they were tossing into the production! It didn't help that the year prior to the release Pirates Of The Caribbean: The Curse Of The Black Pearl (2002 to be precise), Disney released two box office bombs that seemed to be precursors to Pirates walking the plank at the box office. The Country Bears was based on a Disney theme park attraction as well as a box office bomb, while the underrated gem Treasure Planet seemed to reinforce the notion that pirates were box office poison, pure and simple.

Revisiting the film for the first time in a few years, a virtue of the motion picture that truly stuck out to me was how it delivers its story with zero snark. This is not a tale looking to constantly remind you of how "hip" or "edgy" it is, instead telling its classical story and characters in a pleasantly entertaining manner. By going for a spirit of free-wheeling fun, it manages to create a far more compelling plot than its sequels and their bloated (though undeniably fun in many parts) attempts at creating an "epic mythology".

For instance, the romance between Will Turner (Orlando Bloom) and Elizabeth Swan (Keira Knightley) doesn't exist solely because some dense studio executive thought that was the only way women would go see their movie. Surprisingly, the relationship between these two serves to expand both Will and Elizabeth as characters, as well deliver moments that'll make you chuckle and warm your heart. Forgoing all traces of cynicism here does wonder for making the romance between the duo pop, and it's an approach that serves the rest of the film well.

I'm kind of shocked it's taken me this long in this review to talk about Jack Sparrow (Johnny Depp), given how much he's dominated the franchise in the years since this initial movies release. But there's a reason why Depp garnered such heavy doses of praise for his performance here, as his unqiue body language and comic timing render Jack Sparrow an unpredictable individual constantly keeping the characters and the audience on their toes. While successive films would go overboard on Jack, there's a far more deft balance in this films screenplay between how much the script serves Jack Sparrow and how much the character influences the story. That's the kind of stability that not only keeps the plot moving at a steady pace, but also allows Johnny Depp to excel.

Speaking of the script, which is written by Ted Elliot and Terry Rossio, good Lord this is a tightly constructed feature. Each character has a distinct purpose, the tiniest throwaway lines manage to have a larger importance and it manages to come up with some new imaginative plot turn or twist at any given opportunity. Helping to bring this script to life is director Gore Verbinski, whose playful energy ensures the cynicism-free vibe of the screenplay is executed into reality marvelously. What a shame that The Lone Ranger seems to have tossed Verbinski off the map; he shows real craftsmanship here steering a film like Pirates Of The Caribbean: The Curse Of The Black Pearl into the waters of classic filmmaking.
Posted by Douglas Laman (NerdInTheBasement) at 2:44 PM