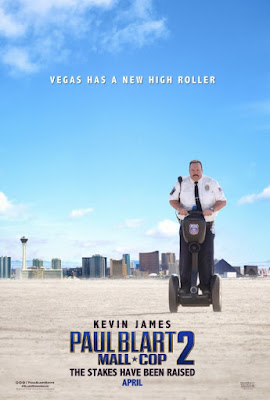 Compared to its predominately Adam Sandler led Happy Madison brethren, the original Paul Blart: Mall Cop practically stands as a triumph. While it suffers from some of the faults of its kin (indistinct directing, a supporting cast not given proper depth, etc.), it's more jovial tone was a sharp contrast to the more mean-spirited tone of the likes of Jack & Jill and Grown Ups 2,  and it's plot (people are held hostage by bad guys in mall, Blart must stop them) had an actual cohesive structure to it.


Paul Blart: Mall Cop 2 falls more in line with the lackluster successive projects like Zookeeper and Here Comes The Boom James did after the first Mall Cop movie became a huge hit than its predecessor. At least it avoids the crude pitfalls of, say, Pixels, but that's really all one can say for this slipshod endeavor. The slim plot gets started by following the path of many comedy sequels and getting rid of the first films main romantic interest (remember how quickly Anchorman 2 and Ted 2, for instance, ditched the wives/girlfriends of the protagonist in the last feature?) and then having the titular characters mother get run over by a milk truck.

It's such a bleak way to start off a conventional family movie I might normally give the writers of the film props for going to such a dark place if it wasn't apparent that the only reason such an event occurs is so that they can repeat Blarts character arc (underdog guy is put into a precarious situation and must prove everyone wrong) from the first movie. Yawn. The only difference this time around is that the film is set in a Las Vegas and the change of scenery from mall to hotel means the story doesn't even have the fun moments from the first film that had Blart take down foes by taking advantage of certain hallmarks of malls (i.e. a Rainforest cafe).

Instead, the environment plays no major part in the plot, it's just a cookie-cutter location for the "jokes" to take place. I'm sure few will have missed that I put the word jokes in quotation marks, and yeah, I'm sure the reason for that is obvious. Attempts at humor in this film are just dire, especially whenever the basis of the gag is "Blart says something weird or awkward", which are witticisms that are executed in such a clunky manner as to render them less jocular and more gawky than anything else. Blart acts in such an abnormal demeanor for much of the film, solely so the film can create some semblance of humor (it fails spectacularly in this task), that it totally destroys his character. I'm not rooting for this guy to save the day, I'm rooting for someone to put him in a straight-jacket.

Neal McDonough gets the honor of playing the movies bland as hell baddie, whose only distinctive features are his differently colored eyes and an allergy to oatmeal. Good luck trying not to sleep whenever he or any of the films other characters waltz onto the screen, as they're all working with a script so blatantly disinterested in actual narrative storytelling or character development, it's kind of insulting. Paul Blart: Mall Cop 2, basically, is the kind of poorly created, humorless motion picture that I feared I'd get with its predecessor.