Ant-Man 2 Confirmed For 2018 As The Marvel Cinematic Universe Updates Its Release Schedule! 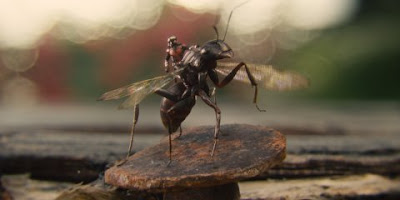 I was pretty certain we'd get an Ant-Man 2 sometime down the road, but I was thinking they'd hold off on such a project until after the Avengers: Infinity War project was completed. After all, both of those movies will almost certainly feature Ant-Man, and his presence in those two films (as well as next year's Captain America: Civil War) could boost his profile significantly, leading to his solo movies performing at higher levels of box office, just like how Captain America, Iron Man and Thor's post-Avengers solo outings did far better business than they're pre-Avengers entries.

Ant-Man And The Wasp took over the release date previously reserved for Black Panther, who will now come out on February 16, 2018. It's awesome that the King of Wakanda will not only hit theaters earlier but also that Marvel is taking a risk with an unorthodox February release date. Hey, if Captain America: The Winter Soldier could thrive in April, why can't Black Panther do the same two months earlier in the year? Alas, Ant-Man getting a sequel in 2018 means Captain Marvel (whose debut film was originally scheduled for November 2018) has been delayed until March 2019. At least this second release date delay is to make way for a female led project, whereas the first delay was to ensure that Peter Parker got a sixth movie to discover what exactly comes with great power.

There's also been three dates scheduled for 2020 (May 1, July 10 and November 6), though no films have been attached to those dates. I don't know about you dear reader, but I'm over the moon on this news, even though it does suck that we've got even longer to wait until Carol Danvers gets to kick some ass on the silver screen. But the concept of seeing Wast, Scott Lang & Michael Pena (give him the Giant-Man suit Marvel!) again makes me giddy, as is the idea of Black Panther coming earlier than expected. Now if you'll excuse me, I'm gonna go read a bunch of new editorials that'll use this release date news as an opportunity to talk about how Marvel Studios is ruining movies, audiences don't like superhero movies anymore despite spending $1.4 billion on Avengers: Age of Ultron this summer or some other nonsense. I need a good laugh!

Hey look! Paul Rudd seems to be celebrating the news of Ant-Man And The Wasp!

Posted by Douglas Laman (NerdInTheBasement) at 11:26 AM