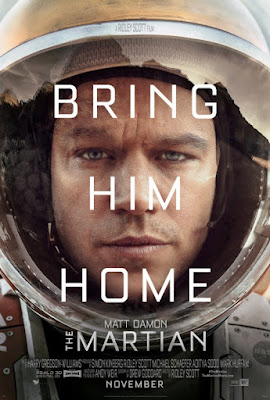 Just before Mark Watney (Matt Damon) attempts to grow some food on the surface of Mars (the planet where he's been inadvertently stranded), he makes a video log where he declares that the planet "...will soon fear [his] botany skills". Some rock music follows that line immediately as he walks to a crate carrying human excrement that he'll use as soil for his crops. It's a moment that sounds preposterous when I describe it, but given how well the film, even this early on in the running time, has developed Mark as a protagonist more than worth rooting for, this potentially ludicrous occurrence instead becomes exceedingly exciting.

Such is the power of The Martian, which takes the world of science, biology and astronomy and turns them into the hippest creations since The Walkman. Intellectualism is the key to Watney's survival and Drew Goddard's script does a sumptuous job conveying all this scientific information in a palatable way to general moviegoers like myself, who (at least in my case) don't know a proton from a photon. To boot, scenes of him using his wits to survive on Mars also serve as effective character development, and considering how much of the film consists of scenes solely spent with Watney alone on this far off planet, it's great that his character becomes so easy to emotionally invest in.

Director Ridley Scott is the one at the helm of The Martian, and as anyone with even a passing familiarity with his filmography knows, the guy is no stranger to the world of sci-fi. Alien & Blade Runner, which he made back-to-back, make this guy a legend in this particular genre (his 2012 sci-fi effort Prometheus drew a more mixed response, though I enjoyed it in spite of a sloppy script), and it's cool to see him return to this class of cinema with such success. He manages to work wonders in getting storng performances out of the large number of actors in his ensemble cast, and he seems to be relishing the more upbeat spirit of the script after handling more dour films like Exodus: Gods & Kings.

Even in Scott's most dire fare like The Counselor, you can count on seeing some memorable imagery, and with the unique Mars landscape at his disposal, there's a number of elegant shots in the film that are unlikely to leave my mind for awhile. Scott and cinematographer Dariusz Wolski (working together for their fourth film in a row) have loads of visual fun with the realm of outer space, evoking a sense of grandeur in certain scenes, but also finding no problem in flipping on a dime when the time is right to depict staggering intensity that left me with an unshakable sense of disquietude.

Thrills may be one of the high points for Scott, but as I said before, he's also great at finding ways for the numerous members of this impeccable cast to excel without having the film (this acheivement comes with some major help from Goddard's script of course). As should be obvious at this point, Matt Damon is the lead of the film, and he equips himself well in reacting to the various developments he encounters on this planet without the aid of physical co-stars. Jessica Chastain, a cinematic treasure, gets to be the bad-ass space commander with a love for disco music, which is one of the greatest character descriptions I've ever gotten to write.

The likes of Donald Glover, Kristen Wiig, Chiwetel Ejiofer, Kate Mara and Jeff Daniels also get their chance to shine in supporting roles, especially Glover, who brings some of the most humorous moments of the entire movie with his presence. And hey! The Year Of Michael Pena marches onward with the actor delivering a notable turn here that offers him some ample opportunities for comedy and depth. Watching such a talented roster of actors be used to such great effect in a well-told story is always a treat, and thankfully, The Martian doesn't squander the various artistically gifted individuals at its disposal, instead expertly utilizing them to make the motion picture all the more enjoyable.

Yes, there's a lot to admire about The Martian. But perhaps what really struck me as most notable about this feature was its more optimistic spirit. The Martian manages to be reminiscent of older blockbusters like Star Wars or Jurassic Park, which brought intensity when need be, but also had a sense of unity in its stories, the concept that we'd all put aside our differences and band together for the greater good. Is it bad to do a film with darker ideas and a bleaker vision of the human race? Of course not! Some of the greatest movies of all-time utilize such a mindset to spectacular results.

But as many modern blockbusters (like numerous films of the past) seem to think a dark color palette is all that's needed to be a "tonally sullen and thoughtful movie", it's kind of awesome to see The Martian embrace a more upbeat tone that helps make scenes like Matt Damons trek to a box of feces work. The Martian isn't even the first blockbuster this year to use a more buoyant tone to its advantage, but it's all the more successful for going down such a route. A fittingly jocular temperament, great acting, deftly executed sequences of intensity and an ABBA song...The Martian comes loaded with all I'd want in a movie!