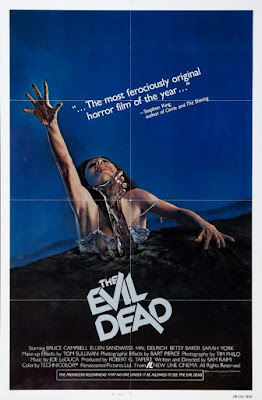 All then-newbie director Sam Raimi wanted to do was make a horror movie. Teaming up with long-time friend Bruce Campbell, who would play the lead character in this prospective feature, Raimi dived into making this project, armed with a minuscule budget (which primarily came from donations from numerous individuals and family members Raimi and Campbell were familiar with) and a script chock full of grisly violence. The result? Well, judging by the immense influence The Evil Dead has had on cinematic horrors in the 30+ years since its initial release, I'd say they might have done something right in their endeavor.

The Evil Dead is not a movie whose low-budget is hidden, quite the contrary, but instead of becoming a hindrance, it's more rustic appearance becomes the motion pictures greatest secret weapon. The unrefined appearance of the cabin our main group of characters (led by Ash played by Bruce Campbell) lends a realistic quality to the environment, which makes the later appearances of the Candarian Demons and all of their grisly mayhem all the more intense to experience. They're such a sharp contrast to the more mundane visuals we've seen in the rest of the movie that it provides another unnerving layer to the movies story.

Could this have been achieved on a higher budget with more polished sets? Maybe, but there's no denying that the more low-key mien of the film is a major factor of why the films scares work so well. While it may be a peculiar thing to take note of, a shot early on in the movie depicting our main characters pulling up to the cabin where all hell will soon break loose exemplifies why this unavoidable low-key procedure works so well for The Evil Dead. See, just as the vehicle gets closer to the cabin, a branch becomes entangled in the bumper for a few seconds, before falling off of the automobile shortly thereafter.

I seriously doubt that part of the sequence was scripted, yet  it's one of a number of trifling aspects of the film that lend these specific scenes a more realistic aesthetic that make the presence of the heightened elements in the plot all the more notable. That attention to detail is one of The Evil Dead's greatest assets, especially since that aspect of the movie stretches to the character development of the five individuals at the center of this plot. Their distinct personalities and relationships to each other are stacked up quite efficiently, showing some real craft from the films sole screenwriter, Sam Raimi. In addition to setting up its cast of characters, the script also has a relentless gusto in embracing the grandiose when it comes time to depict the various extremely bloody (this thing ain't NC-17 for nothing, to pharaphrase the Fritz The Cat poster) portions of the story. No one just bleeds in this movie, they gush out a waterfall of the liquid, while it's rare to see a character get just one limb dismembered.

It's as if Raimi was determined to leave his mark, good or bad, and went balls-to-the-wall in depicting the various grisly situations Ash and his friends find themselves in. It's a unique style of filmmaking, one that the likes of Peter Jackson would be inspired by in the years to come, and for damn good reason. The execution of these sequences is superb, leaving a crazily positive influence on the motion picture and solidifying the films own idiosyncratic depiction of overt terror that would carry over to future Raimi features. Similarly, the directors trademark style of using the camera as a way to depict POV of certain characters is in full force here, and it's an especially clever way to make an unseen entity romping around the forest and attacking various characters leave an impact on the film without ever giving it a visual form seen by the audience.

The actors assembled for this feature are a solid bunch, though Richard DeManincor came off as stilted to me in earlier sequences (to be fair, he's much better later on in the film, especially in a scene where Ash finds him in a perilously wounded state). As our lead character, Bruce Campbell's absolutely aces, getting across the character emotional conflict as the people he loves begin to get possessed, but also permeating a sensation of determination to survive the mayhem that makes for the perfect eye in the middle of this demon-mayhem driven storm. Considering the numerous strengths this feature carries (that tight script, a haunting atmosphere, a star-making turn for Bruce Campbell), this review could pretty much boil down to one singular sentence: thank God Sam Raimi had such a drive to make The Evil Dead .
Posted by Douglas Laman (NerdInTheBasement) at 3:56 PM