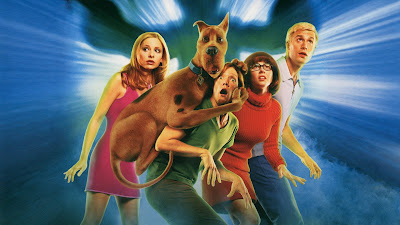 In that bygone era of 2002, the novelty of beloved cartoon characters existing in our world via a mixture of live-action and CGI was as pure as America's love for Freddie Prinze Jr. Thus, it comes as no shock that Scooby-Doo, which brought that Great Dane to the "real world", proved to be a huge box office success. Co-starring Buffy The Vampie Slayer, Laura Barton and Mr. Bean, the movie proved to be a dream come true for Warner Bros. stockholders and a nightmare-inducer for children everywhere.


The nightmares didn't come from the movie being too scary (though it was odd to see a Scooby-Doo feature employ genuine frights instead of just goofy comedy), but rather from the terror of experiencing urine gags, explicit sexual content and "hip" lingo being brought into the world of Scooby-Doo. Oh, it's not like Scooby-Doo was some sacred cow that was suddenly tarnished (the entire franchise had been so toyetic for so many decades now, even Joel Schumacher would think they'd gone too far), but it was all such a poorly executed and blatant attempt to be "hip" and "cool" that it handily became the lamest property ever to be associated with the Mystery Machine gang. And lest we forget, that means this 2002 feature is the nadir of a franchise that spawned Scrappy-Doo.

Now, that's not to say the film is entirely devoid of charms; James Gunn's screenplay, lacking the nuance he'd later bring to Super and Guardians Of The Galaxy, has a couple of funny lines, and Matthew Lillard and Linda Cardellini are perfect as Shaggy and Velma, respectively. Even just removed 13 years from its release, however, Scooby-Doo already feels like an artifact from an era where the concept of removing what made a property beloved in the first place (in Scooby-Doo's case, the sincere simplicity) and replacing it with grating slang and endless bathroom humor was somehow the key to making something "accessible" for the modern day generation. Considering reruns of Scooby-Doo, Where Are You? are still popular on TV while this 2002 incarnation of Scooby-Doo is languishing $5 Wal-Mart DVD bins across America, it seems that plan didn't quite pan out as expected.

To gaze into the abyss that is Scooby-Doo and its creepily designed CGI version of Shaggy's best bud, it'll be airing on HBO Family at 6 PM central time.
Posted by Douglas Laman (NerdInTheBasement) at 7:59 AM