The Duke Of Burgundy Review 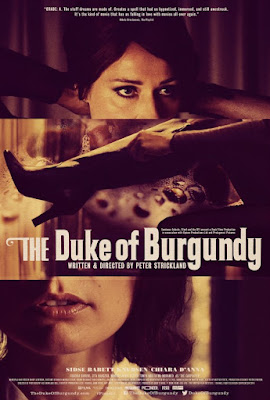 Before the introduction of sound (first via an in-house band and then by pre-recorded music), film was a purely visual medium, and its reliance on imagery continues today, with numerous filmmakers (namely the likes of Terrence Malick) primarily use the art of visuals to advance their plots instead of relying on dialogue. Words are spoken in The Duke Of Burgundy, it isn't quite a silent film, but there are entire sequences where the art of speaking is tossed aside for purely visual storytelling.


The tale that the film explores is that of the relationship between Cynthia (Sidse Babett Knudsen) and Evelyn (Chiara D'Anna), with the two regularly indulging in a sexual fantasy roleplay in which Cynthia orders Evelyn around her house to do various tasks, and whenever Evelyn messes up in one of these tasks, a proper "punishment" is in order. Conflict in their relationship begins to form as Evelyn grows more controlling in their roleplay, while Cynthia yearns for Evelyn to be less focused on the material goods in their romance.

Like I said, telling the story in strictly visual terms is the name of the game here, and for the most part, it's a storytelling approach that works, mainly because writer/director Peter Strickland knows how to create a pretty shot and advance characters in subdued ways. Right off the bat, the dynamic between these two characters is introduced without the context of these two individuals being in a relationship, and the way the film reveals that aspect of the duo and their inner turmoils in a slow burn manner is nicely executed.

Focusing on visuals for much of the film does lead to some moments that feel, frankly, indulgent, specifically a bizarre sequence in which Cynthia is consumed by mosquitoes/moths/butterflies/a flying insect. The underlying subtext of this instance comes through (the swarming bugs represent her growing inner uncertainty over her relationship), but it comes so out of left field that it almost feels like it belongs in a completely different movie. These brief detours in the realm of the absurd are distracting, but luckily their presence in the final feature is minimal, which is thankful as they don't end up distracting from the other virtues to be found in its running time.

Both lead actresses turn in excellent work and I won't be shocked at all if both get a number of roles for their to-caliber performances here. Sidse Babett Knudsen makes every note of joy and heartache bona fide, while Chiara D'Anna similarly brings a sense of realism to her character. Rest assured D'Anna, your superb performance in The Duke Of Burgundy means your barren IMDB filmography won't be empty for long. Plus, both actors depictions of the two characters bouncing off each other in times of both serenity and hardship adds further verisimilitude to the motion picture. I do wish The Duke Of Burgundy could have reigned in some of its more indulgent moments (which include the aforementioned absurdist imagery as well as a slightly overlong running time), but there's no denying this is a well-acted and well-crafted endeavor.
Posted by Douglas Laman (NerdInTheBasement) at 3:43 PM