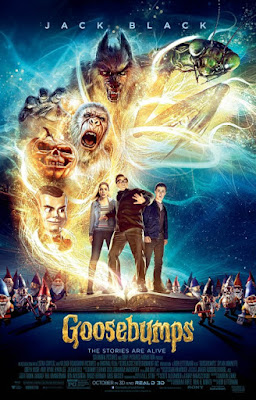 Debuting in 1992, the 62 Goosebumps books written by R.L. Stine over a five year span were some of the most influential of all literature in that era, delivering thrills for younger readers to enormous sales numbers. After the original series concluded with Monster Blood IV (which seems to be a hard book to come by given the $25 price tag a used copy of the novel goes for on Amazon), the series endured into the 21st century with Goosebumps 2000 and Goosebumps HorrorLand keeping Stine and his scary creations alive and well in the pop culture consensus.

Besides allowing me the opportunity to show off my vast knowledge of Goosebumps mythology (yes, I'm single, why do you ask?), analyzing the history of this franchise also makes it obvious why a theatrically released feature is making its way to over 3500 movie theaters this weekend. Instead of adapting just one book from the Goosebumps canon, however, this film decides to unleash all the various monsters, creatures and freaky creations from mostly just the original books on the small town of Madison, Delaware.

How is this possible? Well, as it turns out, R.L. Stine (Jack Black) has been keeping the various monsters he's created over the year encased in books so that they can't wreck havoc on the real world. But the numerous beasts soon escape their confines, led by Slappy The Dummy (also played by Jack Black), and it's up to Stine, his daughter, Hannah (Odeya Rush), the protagonist of the story, Zach (Dylan Minnette) and pointless comic relief Champ (Ryan Lee) to save the town and stop the monsters.

This is a perfunctory plot, but one that does allow for some fun monster mayhem, no denying that. All sorts of creepy crawleys pop up here, ranging from garden gnomes to aliens to werewolves and it is mighty refreshing to see the script go for some darker content whenever the beasts come on-screen that feels more reminiscent of Gremlins than modern day family films like Minions (just look at how our heroes dispose of some of those pesky garden gnomes). There's also a number of clever moments involving placing the various beasts in mundane environments (a hockey rink, a high school, a grocery store, etc.), and those more common settings also allow for some imaginative enough chase sequences.

Unfortunately, we can't focus on the famous monsters all day, there does need to be some character development for our band of ragtag heroes, which is a far more mixed bag. The introductory sequences for Zach and his mom (Amy Ryan) are sufficiently executed, especially in how they handle the fact that Zach's father has recently passed away. Unfortunately, after getting the lions share of the films attention for the first few scenes of the motion picture, the whole "I miss my dad" aspect of his character is dumped from movie completely until a clunky scene towards the end that's supposed to have R.L. Stine and Zach connect based on their shared feelings of loneliness. SPOILER ALERT: this specific attempt at pathos falls flat.

Remember how I casually mentioned that the character of Champ is useless? Yeah, he really is, serving as a weirdly pointless character in the larger context of the story, only demonstrating ceaseless cowardice and getting the other characters into deeper trouble. And of course, him being a nerdy and awkward character, he gets to have a pretty girl (who gets two lines of dialogue prior to kissing Champ) as a prize at the end of the movie. Wowza, this is such an original character arc! Honestly, I'm not even sure why he's in the film, considering far more consistently humorous quips and moments come from supporting characters like Zach's aunt Lorraine (played by Jillian Bell) and two cops played by Timothy Simons and Amanda Lund.

While there are definitive shortcomings in how Goosebumps develops and executes its primary characters, at least these foibles don't impact the most important parts of the movie, the sequences where monsters run rampant. Like I said before, these are easily the best part of the entire enterprise (especially a sequence near the end where all the monsters converge for a showdown reminiscent of a certain 2012 Joss Whedon produced horror feature) and the screenplay even manages to wring some of the films more successful character related moments during these portions of the movie, especially when it comes to the interactions between R.L. Stine and Slappy. So, basically, viewers should beware, you're in for a solid enough feature. And yes, you're also in for a scare.
Posted by Douglas Laman (NerdInTheBasement) at 11:01 AM