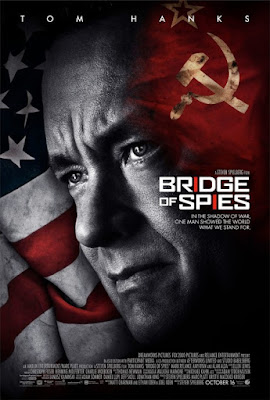 It's interesting to compare this summer's biggest film Jurassic World to its predecessor Jurassic Park, especially since it reveals the finer intricacies that make that 1993 motion picture such an involving feature. Not only does Steven Spielberg have a better eye for spectacle than Collin Trevorrow and his blue-soaked visuals (the T-Rex's entrance alone is a master course in pacing), but there's a brain on that movies shoulders, a cerebral streak that makes the world that characters like Alan Grant and Ellie Satler inhabit all the more enriching. Hell, that scene where John Hammond waxes poetic to Satler on why he wanted to make Jurassic Park in the first place over a dish of ice cream is one of the best moments in the entire film.

Applying that level of thought to characters, motivations and the like is a recurring theme in Spielberg's filmography and a primary reason why his films excel like they do. Just look at how his 2012 drama (and one of his most underrated efforts in my book) Lincoln took an iconic infallible American figure like Abraham Lincoln and showed the way he frequently embraced the phrase "the end justifies the means" to end the Civil War and abolish slavery. They didn't turn Lincoln into a cartoonish villain, nor a perfect saint, he was simply a human being like all of us.

That's the kind of insightful touch that once again crops up in his latest movie, Bridge of Spies, which reunites Spielberg with Tom Hanks after more than a decade. The duos fourth collaboration has Hanks playing James B. Donovan, an insurance lawyer who, in the year 1957, must represent a captured Soviet spy named Rudolf Abel (Mark Rylance) in court, much to the chagrin of his wife, Mary (Amy Ryan) and numerous individuals across the country. Things get even more tense when an American pilot, Francis Gary Powers (Austin Stowell), is caught by Soviet forces and James must attempt to see if it'll be possible to exchange Rudolf for Powers.

This is the kind of story that could easily end up being a cluttered mess thanks to how several important characters in the story are in different and distant locations for much of the running time. Cutting between these subplots could have the effect of undercutting accompanying plotlines and leaving the entire enterprise lacking as a concrete whole. Thankfully, Bridge of Spies is written by none other than Joel and Ethan Coen, otherwise known as The Coen Brothers. two of the most prolific filmmakers working today.

Simply writing a feature for another director instead of undertaking both tasks of writing and directing works out far better here than it did the last time the duo tried this with the middling Unbroken, and with relative screenwriter newbie Matt Charaman by their side (who wrote the original script that the Coen's rewrote), do a top-notch job of ensuring that there's a central character in the heart of this story (James) that the audience can latch onto and that there's unifying themes and ideas between the members of the cast. To boot, the moral quandaries the film explores are quite captivating, especially concerns regarding profiling individuals based on their nationality. Considering the ongoing racial tensions occurring in this country, the glimpses of bigotry seen in the feature tend to especially resonate as having a larger meaning.

For his 35 year stretch as an actor (which started out with one episode appearances on The Love Boat and Happy Days and has led to numerous Oscar nominations and other accolades), Hanks has frequently played the sort of everyman lead that few other actors could pull off with such authenticity and that forte serves him well in this particular role. He can convey the earnestness in his characters hope that everyone, even figures of the despised Soviet union, receive a fair trial and due process, while also emitting a sense of authority when attempting to wrangle into place a plan to trade off spies between the dueling countries.

Mark Rylance has spent almost as long in the world of stage acting as Hanks has in the world of cinematic acting, with the actor making a rare film appearance in Bridge of Spies (it won't be his last though; Spielberg has hired him to play the titular character in his next motion picture, The BFG), which is to the movies benefit considering how much of a revelation Rylance is. I was unfamiliar with the man prior to watching Bridge of Spies, but good heavens, he's a revelation, able to provide a calming presence in the midst of all this uncertainty. Plus, he delivers some extremely memorable humorous lines in a superb manner.

It'd be likely one of the largest cinematic disappointments of 2015 if a film written by The Coen Brothers, starring Tom Hanks and directed by Steven Spielberg fell short, but luckily, I found Bridge of Spies to be an engrossing movie that expertly utilizes the massive amount of talent at its disposal to create another winning and thoughtful entry into the tremendously impressive filmography of Steven Spielberg.
Posted by Douglas Laman (NerdInTheBasement) at 1:27 PM