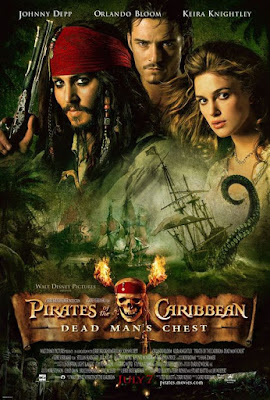 Just as the excellent Marvel Cinematic Universe has spawned wannabe imitators like The Amazing Spider-Man "saga" and a Transformers universe that promises to deliver new Autobot adventures into the next decade, the massive success of The Lord Of The Rings and the Star Wars prequels at the dawn of the 21st century gave birth to the trend of studios hoping to wring "epic trilogies" out of their most popular films. Various well-liked movies began to get stretched into grand sagas to rival that of Frodo Baggins or Luke Sykwalker, the star of another well-know and profitable trilogy that provided further inspiration for this rush of creating trilogies in a post-Lord of The Rings world.

Films like The Matrix, X-Men and Spider-Man attempted to get epic trilogies going, to a wide variety of results in terms of quality (in terms of finances, the results were usually quite profitable with the exception of The Matrix Revolutions). Likely the most notable example of this inclination were the Pirates Of the Caribbean sequels, which took a cue from the Matrix sequels and the Lord Of The Rings trilogy by shooting its second and third movie back-to-back in order to turn its original film into just one piece in a grander story. The world of Pirates Of The Caribbean was ripe for further stories, but the proper route would likely have been taking a cue from the Mad Max sequels, with Jack Sparrow (Johnny Depp) being the stand-in for Mad Max. Just as Max went onto a new story with all-new characters in each sequel, further Pirates adventures should have been sleek and fun tales retaining only Jack Sparrow (and maybe Gibbs).

After all, Will Turner (Orlando Bloom) and Elizabeth Swan (Keira Knightley) had their character arcs concluded in the last film. Where else was there to go for those two? Alas, that's not the way the filmmakers behind Pirates Of The Caribbean: Dead Man's Chest have chosen to go with this sequel (they did go with that storytelling approach for that dreary fourth film, which sorely lacked simplicity and fun). Instead, we're stuck with an overwrought plot that simultaneously feels like it's tossing too much at the audience while all this relentless action and mayhem can't shake the sense of being extraneous.

It seems like screenwriters Ted Elliot and Terry Rossio looked at The Empire Strikes Back for inspiration on how to structure this movies plot. Specifically, just as the main group of the original Star Wars trilogy is split up into two different storylines for the majority of the movie, here, Jack Sparrow, Will Turner and Elizabeth Swan each have their own diegesis to deal with. Occasionally, these separate plots intertwine, but mostly they're entirely separate story threads that don't advance the overarching plot or characters at all. Whereas the differing stories in Empire Strikes Back all had purpose, the various adventures seen in Dead Man's Chest seem to solely exist to kill time before the third movie arrives. Sure, there's a moment or two of fun to be had in scenes like a detour to an island of cannibals, but there's nowhere near enough thrills to be found in such an extraneous scene to anywhere near justify its existence.

The problem with splitting these guys is that, unlike in Empire Strikes Back (where Luke bounced off of R2-D2 and Yoda while Han and Leia rubbed shoulders with Lando, Chewbacca and C-3PO), the individual stories mostly don't have anything in the way of interesting characters or conflicts for our heroes to face. Elizabeth Swan mostly just vanishes from the middle of the movie as she stowaways on a ship, Jack Sparrow has various subplots (namely an undertaking to get 100 souls for Davy JoneS) that go absolutely nowhere and only Will Turners time spent on the ship The Flying Dutchman is entertaining. That can be attributed to how his dad, Bill Turner (Stellan Skarsgard) is one the ship, which lends this plotline some emotional heft, and the fact that the captain of this ship is the movies villain, Davy Jones (Bill Nighy).

Jones feels like he belongs (or better yet, deserves) to be in a more cohesive movie than this one. The design of him, as well as his crew, is uber swell, his backstory is great and Bill Nighy does an excellent job going all bombastic with every word he utters from his tentacle covered lips. Unfortunately, he's saddled with the same problems ever other character has in this feature, mainly in that he lacks anything noteworthy to do here. At least Jones gets a goal of some sort (settle a debt with Jack Sparrow) to work towards in the course of the plot, which is better than everyone else in the cast, who're more adrift than debris from a sunken ship.

There's nothing wrong with ambitious storytelling like this one, which attempts to stretch the characters and environment of the first film into a larger scale story. But for me, this one just doesn't have enough of an engaging plot to work as a cohesive plot. To boot, it has an aggravating habit for turning elements of the first film into objects of overt importance, a tactic it seems to have swiped from the Star Wars prequels, which turned Darth Vader into a "chosen one". Similarly, Dead Man's Chest turns Jack's compass, a simple trinket in the first film, into a mystical MacGuffin of sorts for certain characters to chase after. It's a forced plot development that, like the rest of Dead Man's Chest, just seems to exist simply because it can and not because someone had an actual desire to bring it to life or even because someone thought it'd be cool to execute. From a distance, this movie looks structurally ambitious, but Dead Man's Chest is as inert as an empty bottle of rum.
Posted by Douglas Laman (NerdInTheBasement) at 2:28 PM