"You Better Hold On Tight Spider-Monkey": Journey Into Twilight: Part One 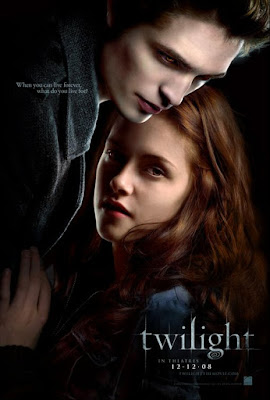 In the four years it existed as a film franchise, The Twilight Saga garnered a tidal wave of hatred, the kind reserved for the level of subpar cinema occupied by the likes of Disaster Movie and God's Not Dead. Rare was the joke in this era that didn't use the tale of Bella and Edward as a punchline, but was such a response solely due to them being bad movies? After all, bad blockbusters like Transformers are reviled, but they don't receive the sort of drubbing down that Twilight got, to the point where anyone who enjoyed the films was labeled as nothing short of a dimwit or a heathen.

I have a hunch that the reason Twilight (and successive female-skewing films like Fifty Shades Of Grey) receive that sort of response is because the majority of the audience for Twilight and its kin is female. And it's not exactly a rare phenomenon for something that teen girls tend to enjoy to be looked down upon in pop culture. That's not to say anyone that doesn't enjoy the films is a raging bigot (I personally didn't care for the first Twilight film), far from it, but the world of criticism is a complex one and the idea that a gender double standard that has negative consequences against women existed in many (primarily male figures) who took particular glee in disparaging in the film isn't a far-fetched one.

With all that in mind, I decided to finally see if the Twilight saga was worthy of all of its criticism, and what better time to undertake such a task than a time of the year when vampires, werewolves and other monsters are on the mind of many in the world? To get things started, is, of course, my review of Twilight, the one that started it all. With seven years of distance between my first viewing of the motion picture and its initial release, it's interesting to note how much has changed since Bella first trotted out onto the silver screen. Actors like Kristen Stewart, Robert Pattinson and Anna Kendrick pop up here prior to their more critically beloved performances, while elements of the plot that were predominantly deemed sweet back in the day (though still received much ire from numerous viewers) like Edward watching Bella as she sleeps feel more creepy than anything else.

The premise of this introductory chapter of the "grand saga" has a relatively simple premise, as Bella Swan (Kristen Stewart) meets Edward Cullen (Robert Pattinson), who reveals himself as a vampire. She and Edward fall in love (in a rather quick fashion), but whilst playing game of vampire baseball, an evil vampire named James (Cam Gigandet) develops an urge to eat Bella. Then they've gotta run around a bit before Bella, Edward and the numerous members of Edward's family confront James in a vampire heavy showdown.

More than anything else, Twilight feels like a confused effort. Some parts of its production (such as when Edward and Bella first meet in Chemistry class) are gloriously bombastic, while other portions of its plot are presented in a bizarrely grounded and unimaginative matter. The two parts can't gel well together, and feel like the screenwriter of the project (Melissa Rosenberg) was struggling to figure out what sort of tone or style to actually go for here. Look no further for blatant proof of this problem than a brief scene where a security guard is attacked by the movies three antagonistic vampires, which is given no set-up of any kind. It's a burst of intensity that feels like it came from an entirely different movie and doesn't last long enough to establish any sort of character related element that could make the scene more vivid. In the end, it comes off as just a bizarre detour into a whole other kind of motion picture that sticks out like a sore thumb against the pedestrian high school set sequences.

But perhaps nothing encapsulates the movies struggle to establish its own identity than in the way it handles the central romance between Edward and Bella. This is a plot thread that might, just might, work with a more grandiose approach that distanced itself far far from the confines of reality, thus making the more absurd aspects of the relationship feel slightly less problematic. Instead, there's a bewildering choice to play this romance entirely straight-faced, which makes scenes like the nearly century old Edward watching over a 17 year old Bella feel disturbing enough to belong on an episode of Hannibal. What a shame they don't handle this crucial part of the movie better, especially since Stewart and Pattinson have shown in the years since they have more than enough talent to make this sort of material work.

Truth be told, the majority of Twilight left very little impact to me, coming across as more of a middling, forgettable outing than anything else. Aside from the numerous creepy actions of Edward that are supposed to come off as romantically charming, the aspect of the film I found most disdain with was its visual approach, which starts and stops at dousing every frame with a distracting blue tint. Every frame is drenched in this color, with even certain environments (namely the walls of a hospital Bella stays at) and the majority of Edward's clothing being covered in blue.

I have no clue what the film was trying to accomplish with this blue motif, but at least, in terms of visual aspects of Twilight, director Catherine Hardwicke puts in some of the best work of anyone in the production. She's where many of the more stylized elements of Twilight originate from, with her penchant for Sam Raimi-esque POV tracking shots and 360 degree came movements at least lending more of a pulse to the movie than the flatly written characters. Truth be told, I'd be super interested to see her do a higher quality film and discover if, like Kristen Stewart and Anna Kendrick, her talents have been stifled by the realm of Twilight. Perhaps future outings will showcase why this particular saga draws so much anger from many, but looking at it as a whole, very little of Twilight left an impression on me, good or bad. The largest takeaways I got from it were A) we need to give Hardwicke something to do, and B) Bella falls in love with an immortal murderer waaaaaaayyy too fast.