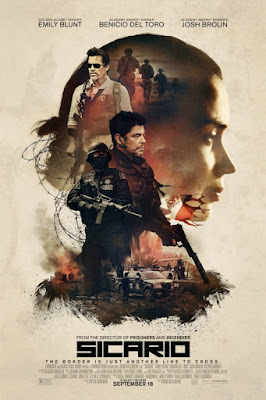 There are no easy answers to be found in Sicario and its examination of the War On Drugs, and believe you me, that's a good thing. It's lack of providing a concrete solution to this real life epidemic doesn't stem from a screenplay uninterested in providing a suitable resolution to its story. No, it's a symptom of the films bleak aesthetic depicting the ceaseless violence that's emerging from this conflict. There are no winners here, only people who miraculously survive one more day to continue the fight.

Serving as an audience surrogate of sorts, FBI agent Kate Macer (Emily Blunt) is brought into the heart of this war in Juarez, Mexico, alongside Matt Graver (Josh Brolin) hoping to catch the individuals responsible for all sorts of violence and grisly crimes she's witnessed. But there's more to this War On Drugs than she initially believes, as the rampant violence utilized by both sides of the conflict leads to her understanding of this entire campaign to be constantly upended.

Macer is not, as this plot description obviously shows, an expert in this realm of hostilities and that's what makes her character so damn fascinating. Watching her attempt to adjust to these new surroundings is great to watch, especially since Emily Blunt has knack for ensuring that the characters bravado laced with uncertainty is executed in a captivating manner. To boot, it's fascinating to watch her character grapple with the numerous morality-related quandaries presented by Taylor Sheridan penned script, the most prominent of those quandaries dealing with the lengths each side of the war is willing to go to in order to obtain some semblance of victory.

No one is more aware of or entrenched in that sort of mare's nest than Alejandro (Benicio Del Toro), a figure of imposing presence the moment he walks into the movie. That aura only increases as the story goes on, rendering the character an antithetical contrast to Macer; if she's the unfamiliar figure coming to terms with the ever-changing morally dubious circumstances around here, Alejandro is the one whose all too familiar with this world and whatever minimal rules still apply out here. Del Toro is all too skillful at lathering his character in gravitas as well as proving himself adept at more physical violence when the time is right (which ranges from traditional shoot-outs to one helluva wet willie.)

I know this is gonna sound crazy, but I'm starting to think cinematographer Roger Deakins may have some talent when it comes to his cinematic profession. Yep, the man has done it again, and his excellent work here reminded me of another Southern set, Josh Brolin starring adventure dealing with the unending nature of cruelty, No Country For Old Men, especially in regards to the themes both movies tackle. Just like on that motion picture, Deakins is working with a strong director, Denis Villeneuve. Even working with a tonally dark story like this one, those behind the cameras of Sicario don't ease up on some stunning shot, with one specific engrossing sequence towards the end involving Alejandro being a particularly excellent example of how the visual side of filmmaking can make-or-break a film.

Even with all that praise out of the way, there's one other top-notch part of Sicario I haven't mentioned yet; the character of Silvio (Maximiliano Hernandez). In another movie, he might have just been relegated to being yet another antagonistic figure with minimal screentime or character development, but three entire scenes are devoted to depicting him in his tranquil life as a father. Does it excuse his unsavory actions in the course of the story? Of course not. But it does show that Sicario is a movie that understands the more human aspects of its characters, as well as the ghastly underbelly of the world it inhabits. And the fact that this movie understands those individual aspects so well becomes a boon to the plot once the concept of potentially sacrificing one's humanity in order to fight in this war comes into play. Exploring that sort of darkness makes Sicario an intense ride, but one so full of top-caliber filmmaking, writing and acting that I can assure you it's one ride you won't regret taking.
Posted by Douglas Laman (NerdInTheBasement) at 10:26 AM