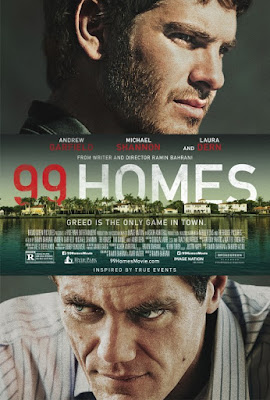 Michael Shannon is a top-caliber actor that, for my money, does not get enough praise for his acting accomplishments in his career. Here's a dude who has mastered the art of intense acting, but he always manages to bring a new angle to this type of performance. In Revolutionary Road, for instance, he has his intensity stem from indignation from those around him, whilst the David Koepp bicycle action film Premium Rush has him become one helluva hostile individual due to overwhelming desperation.

No matter how he approaches the fierceness in his characters, you better believe Shannon has some nuance and subtleties he'll bring to the performance that'll remind us all why he's an actor like no other. In 99 Homes, the newest feature film from Ramin Bahrani, Shannon plays Rick Carver, the man whose responsible for evicting Dennis Nash (Andrew Garfield), Nash's mother, Lynn (Laura Dern) and his son, Connor (Noah Lomax), from their home. Prior to this, Dennis was barely keeping his head above water, and now he's struggling to keep him and his family in a motel room. So when Rick offers him a job, well, he can't turn down easy money like that, can he?

The allure of a better life leads Dennis to do some extremely shady activity throughout 99 Homes, and thankfully, his character transformation is handled gracefully by screenwriters Ramin Bahrani and Amir Naderi. Dennis doesn't go from saint to Satan in 30 seconds flat, his moral decay is a more gradual process, which is far more interesting to watch in my book. Prior to that character arc, Garfield does a killer job making Dennis the kind of character one can't help but sympathize with in his struggles. Which, of course, makes his progression over the story all the more difficult to stomach as it unfolds.

Even as the allure of financial stability leads to endless moral compromises on Dennis's part, flashes of his original personality always manage to seep through, and giving the character that kind of nuanced detail is one of the best parts of the riveting script concocted by Bahrani and Naderi. It treats Dennis and the numerous figures he encounters in this story (namely, the people he evicts and those that are helping him to evict individuals from their places of residence) as real complex people. The obvious craft put into fleshing out the movies world and cast of characters make it all the more of an enriching experiencing watching Dennis navigate through this world, trying to accumulate money for his family while attempting to retain some sort semblance of a moral foundation.

That's a more difficult proposition than he could ever imagine, especially given the understandable anger stirred up by the various families that are kicked out of their homes by Dennis and his cronies. Shannon, playing the man who lures Dennis into this life, gets to use his aforementioned acting skills to make Rick Carver a man whose every word seems to be designed to draw people in. He's got no BS whenever he speaks, he's here to deliver the truth in any given situation, and nothing more. Shannon plays it so damn well, and a monologue he gives to Garfield's character about winners and losers in America isn't just one of the movies highlights, but one of Shannon's best moments as an actor to date.

In addition to 99 Homes serving as a top-caliber showcase for its actors and Ramin Bahrani as a director/writer, the aforementioned filmmaker also serves as this motion pictures editor, and his rhythm and pacing in the films more intense sequences (and trust me, there are some nerve-wracking moments in here, especially in the crackerjack climax) lets the emotion of its characters come through in potent ways that can either embrace subtlety or the art of being overt in the best possibly way. Yeah, Bahrani is a cinematic jack-of-all-trades if this movie is any indication, and damn is it a shame that 99 Homes isn't doing better, because the excellent work he and his cast & crew put into the feature should be properly rewarded. At least they can hold their heads high knowing they've made one of the better films I've seen in 2015, a fervently paced motion picture that's so effective at depicting the kind of brutal desperation people can succumb to that it left me in utter awe.
Posted by Douglas Laman (NerdInTheBasement) at 10:29 AM