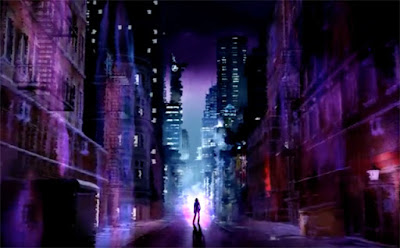 After more than a month of teasers (really well-crafted ones at that, so simple but so effective at conveying a unique tone and being memorable), a full trailer for Jessica Jones, the newest TV show from Marvel/Netflix, has been released. Check it out below!

First off, thank God that Jessica Jones looks to be going for a more cinematic visual style like Daredevil than the bland, overly dark aesthetic that consumes Agents Of S.H.I.E.L.D. Secondly, holy hell is David Tennant terrifying in this trailer, with his vocals as The Purple Man being an enormous presence in this trailer and lending an ominous tone to the proceedings. Thankfully, that menacing character doesn't overwhelm Jessica Jones from making her grand entrance in this trailer, and damn, does she fascinate me as a character.

Contrary to the likes of Scott Lang or Peter Quill, who seek redemption via their actions as a superhero, Jessica doesn't care at all about what other people think about her. She's got enough problems trying to buy alcohol, (God do I love that "Booze isn't usually free" line), solve cases and dealing with The Purple Man. Krysten Ritter certainly has the chops to pull off this sort of role with pizzazz to spare, and judging by this trailer, they may have something truly special in store come this November.

Quick side-note; I'll be doing reviews for each and every single one of this shows episodes come this November. I can assure you I won't reach the heights of quality writing that my fellow Solute writer Grant Nebel ("wallflower") more than hit with his coverage of The Shield and True Detective (if you haven't read those pieces yet, do yourself a favor and consume them ASAP, they're masterful), but I do think I'll be able to lend some insightful two cents into the show with my thoughts and knowledge of the wonderful of Marvel Comics.

Jessica Jones debuts on Netflix November 20th, my coverage of it will likely begin a day later.
Posted by Douglas Laman (NerdInTheBasement) at 10:11 AM