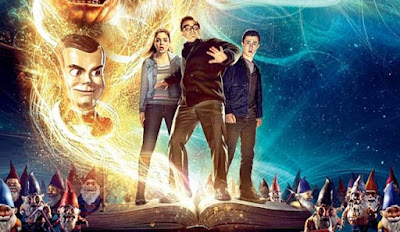 Goosebumps was numero uno at the box office this weekend, grossing a decent $23.5 million in its opening weekend. That's a solid number for the book adaptation, though putting it below the opening weekends of other movies of its ilk (Ender's Game opened to $27 million for instance and this opening was about on the same level as the $23.2 million debut of Eragon from ten years ago). This one should perform well over the next two weeks considering how well timed it is to Halloween, though The Peanuts Movie will likely demolish it in its fourth weekend.

It had to secede the number one position at the box office this weekend, but The Martian still remained formidable with a $21.5 million gross that was a 39% decline from last weekend. That's a harsher drop than third weekend dip of Gravity, but with a 17 day gross of $143.4 million, I doubt anyone involved with The Martian is griping.

Bridge Of Spies made a solid $15.4 million over the weekend, a debut that was roughly 40% below the opening weekend of the last Tom Hanks drama to debut in October, Captain Phillips. That feature had more action, a more well known real life event to be based on and was more expensive than Bridge of Spies (Phillips cost $55 million, Spies only $40 million), which still eked out a reasonably decent showing. It is hard to imagine it sticking around in theaters through Thanksgiving like DreamWorks/Disney wanted, however, simply because it's not likely to generate large enough grosses in the three weeks of October to justify it hanging onto screens once major holiday season releases like Spectre come around.

In fourth place was Crimson Peak, the newest Guillermo Del Toro effort that became the newest box office dud from Legendary Pictures partnership with Universal Pictures (following in the footsteps of Blackhat and Seventh Son) with a tiny $12.9 million opening weekend sum. This one likely got majorly impacted by its deceptive marketing and reviews that weren't rapturous enough to get people on-the-fence on the project to give it a shot. Frankly, I still plan on seeing this bad boy in theaters (likely sometime during the week), but it's pretty apparent a number of moviegoers will be passing on this one. Given the frontlaoded nature of horror movies, it's likely Crimson Peak closes its domestic run under $30 million.

Rounding out the top five was Hotel Transylvania 2, which held well against new family movie Goosebumps with a 39% drop resulting in a $12.2 million weekend.  Drac and his pack have now grossed $136.4 million over 24 days and are running 16% ahead of the 24 day haul of the first Hotel Transylvania feature.

Both of last weeks new release plummeted this time around, with Pan collapsing to a 62% plummet and a $5.6 million gross for the weekend. The new take on Peter Pan has only grossed $25.4 million in ten days, It's looking more and more likely that, among 2015 features, the $150 million budgeted Pan will have a lower domestic haul than titles like Max (another family film from Warner Bros. that was far cheaper to make) and The Age Of Adeline. Meanwhile, The Walk lost all of its IMAX 3D locations this weekend, which resulted in a 69% drop to a $1.1 million gross this weekend. That's the second worst second weekend drop for a 2015 film only behind the 73% collapse of Fifty Shades of Grey. The Walk looks like it'll eke out a total domestic cume between $11 and $12 million, far below expectations.

The final new wide release of the weekend was Woodlawn, the newest film from Pure Flix, the studio behind Do You Believe? and God's Not Dead. It took in $4.1 million from 1500 locations, a showing good enough for ninth place, just behind the third weekend haul of Sicario. That opening weekend is an improvement on the $3.5 million opening of Do You Believe? from earlier this year, and there's a good chance it'll cross $10 million before it leaves theaters.

In the land of limited releases, Steve Jobs was once again king, grossing $1.55 million from 60 locations for a superb per theater average of $25,833. Looks like this film is poised for a great debut when it goes into wide release this coming weekend, especially considering its extremely positive reviews and the large scale fame Steve Jobs has as a real life figure. Three new releases also entered the limited release fray, to varying results. Room had a great launch with a $120,000 opening weekend from 4 locations, for a $30,000 per theater average, one of the best limited release per theater averages of 2015. By contrast, Truth stumbled in its 6 location debut, only making $76,646 for the weekend and averaging just $12,024 per location. Finally, Beasts Of No Nation launched in only 27 theaters (all Landmark theater locations, to my knowledge) to only $50,699, which would be a worrisome result if the film wasn't simultaneously available to view on Netflix.

The Top 12 grossed $109 million this weekend, a 10% decrease from the same weekend last year when Brad Pitt unleashed Fury on the box office.
Posted by Douglas Laman (NerdInTheBasement) at 9:51 AM