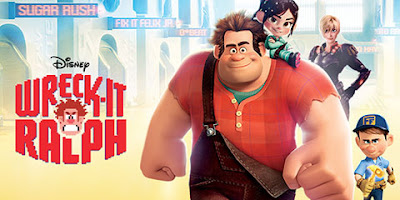 Well, the release slate for Walt Disney Animation Studios got an update today, as director Rich Moore and actor John C. Reily announced that Wreck-It Ralph 2 is arriving March 9, 2018! An image released to commemorate the occasion, showing Ralph and Vanellope looming over buildings with names obviously parodying the likes of Amazon and Google suggest that the forthcoming follow-up will take Ralph and his pals to the internet and perhaps even modern day gaming. I personally loved Wreck-It Ralph, it's got a great script, a terrific vocal performance from Reily and its world seems perfectly suited for new adventures. So yeah, I'm jacked for more Wreck-It Ralph movies!


Now, there is one other interesting thing to note; Walt Disney Animation Studios had another movie set for March 9, 2018 prior to today, Gigantic, a re-telling of sorts of Jack & The Beanstalk.
The film was heavily promoted during last year's D23 Expo, with a song from the film being performed. Wreck-It Ralph 2 appears to be taking over its release date, but there is no confirmation at this time if Gigantic is simply getting a delay or being outright cancelled. My guess? Gigantic will now come out in Thanksgiving 2018 to allow for some creative rejiggering, something that Peter Sciretta over at SlashFilm mentioned had been rumored to be occuring for a while now.

It'll be interesting to see where Gigantic falls on the release schedule, but for now, hooray for Wreck-It Ralph 2! Rich Moore has been on fire with directorial efforts thus far and I'm excited to where he takes this world next!
Posted by Douglas Laman (NerdInTheBasement) at 11:21 AM