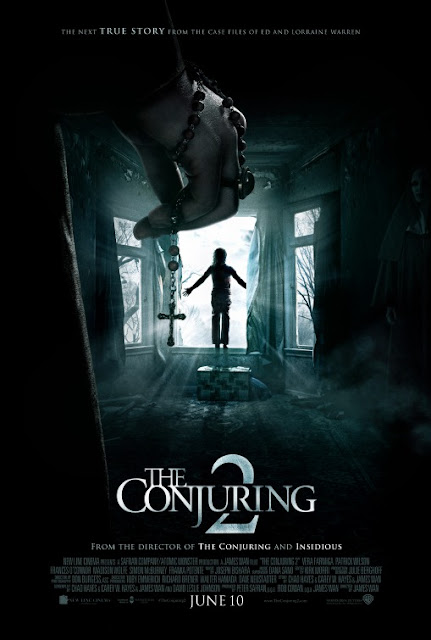 Like other well-known sequels such as Garfield: A Tale Of Two Kitties and Muppets Most Wanted, The Conjuring 2 takes its supernatural activities to the U.K., to allow for a distinctly new environment for paranormal investigators, Ed (Patrick Willson) and Lorraine Warren (Vera Farmiga) to inhabit and, hey, if it also helps boost the box office in that country, then who's gonna complain? In the 1970's, the duo travels to the country to investigate a young girl who appears to be possessed by the spirit of a man named Bill Wilkins and the possession itself is causing all sorts of problems around the household, as your demons tend to do.

At the same time, Lorraine has had a vision involving the death of Ed and a sinister Nun that has made her apprehensive to taking on anymore cases. She decides to give in and help this family out...but could there be a connection between this Bill Wilkins and Lorraine's vision? That's easily the biggest question The Conjuring 2 grapples with in its story.  There's not really any mundane drama amidst the family of the possessed girl that plays into the demon stuff (a recently departed father comes up early on in the plot but nothing about him is mentioned again save for his Elvis records) while there aren't any allegories to be found for real life events or themes that played out in the real 1970's.

Simplicity is the name of the game, which can leave the film sometimes feeling thin in the story department, sure. Notably, supporting characters like a scientist (who I could have sworn was being played by Jared Harris, but is actually portrayed by Simon McBurney) whose personal loss motivates his paranormal research and a lady convinced the entire affair is a hoax just sort of fade out of the movie over time. But that fixation on keeping things straightforward does help when it comes to one of the movies most important facets: scares.

Director James Wan knows how to get the creepiness in his horror movies going without overdosing on gratuitous blood or other similar elements in lieu of actually creating something that'll keep you up at night. Hell, the only Saw movie he directed, the original 2004 feature that started it all, is more reliant on the concept of being helpless and trapped instead of more grisly blood-soaked stuff. With his trust camera at hand ready to swerve around any environments his films take place in, Wan does know hot to jolt the audience into scares and also when to lull them into security by subverting audience expectations. There are a few wry moments where just when you think something terrifying is about to jump out.....things reveal themselves to be far more mundane than they appear.

That's the kind of sense of fun that helps The Conjuring 2 in its best moments. Yeah, the scripts formulaic in its set-up and characters (and the resolution to defeating the demon feels like an abrupt twist that came about simply because the screenwriters couldn't figure out a better way to conclude the proceedings) but it's hard to argue too much with certain well-trodden elements when the production does have a good eye for how to dress up the familiar in brand-spanking new clothes. It's also noteworthy that there are one or two bizarre visual elements (like a demon spirit emerging from a household pet) that show an admirable willingness to briefly wade into the waters of full-tilt craziness.

Patrick Wilson and Vera Farmiga have an easygoing chemistry and presence in the movie that can be easy to take for granted, but I do want to give both actors sincere marks for being a believable married couple in all of the demonic shenanigans of this movie. It's nice that the script doesn't toss in a contrived maritial problem for the duo to confront and overcome instead just having the two care for each other and realizing the spirit of a deceased dude possessing a little girl and wrecking shop in England is plenty of conflict for this story to have. That's the kind of simplicity that sometimes hinders The Conjuring 2, but mostly ensures that it's solid spooky cinema.
Posted by Douglas Laman (NerdInTheBasement) at 11:32 AM