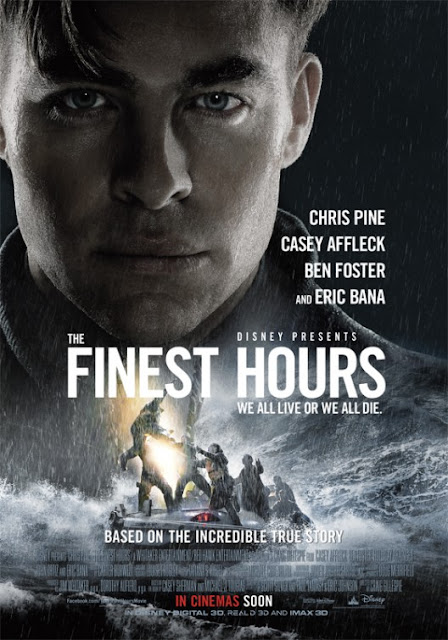 Chris Pine has struggled to really take off as an A-list leading man now that Star Trek has made him at least a well-known, though admittedly not quite a household name, kinda guy. I've always liked the dude, and even in otherwise crappy movies (like Horrible Bosses 2) he usually still gives it 100% percent. But there's no denying that some of his post-Star Trek efforts haven't quite taken off, with the likes of This Means Wars, Rise Of The Guardians and Jack Ryan: Shadow Recruit being non-starters at the box office. On the positive side of things though, he had the best moment, far and away, of Into The Woods and his 2010 effort  Unstoppable with Denzel Washington was a rip-roaring fun thriller.

Alas, Pine's losing streak financially continued this past Winter with The Finest Hours, a drama that stars Captain Kirk himself as Bernie, a member of the Coast Guard in New England who sets off with a small group of individuals (three other men to be precise) to save half of an oil tanker filled with deserted human beings who are currently being led by the timid Ray (Casey Affleck). The oil tanker was split in two by a massive sea storm that's still raging on as Bernie and his crew head off to save the stranded crew members. It's gonna take courage, heart and more than a pinch of luck for them to find their sea legs in this daring rescue mission.

This is typical inspirational movie fodder, but a well-crafted movie could have made the more familiar storytelling elements feel brand new. Unfortunately, the script is a shockingly scattered mess, especially when it comes to its characters. Consolidating the proceedings to a limited perspective by concentrating solely on Bernie or Ray, or even just the two of them, or opting for a story that had a large cast of well-developed characters would have been fine options on their own, but instead screenwriters Scott Silver, Paul Tamasy and Eric Johnson opt for a combination of those two aforementioned types of story structure.

That leaves anyone that isn't Bernie or Ray (pardon the pun) stranded at sea, with Bernie's three compatriots having no discernable personality to speak of. Meanwhile, Ray is surrounded a whose-who of poorly executed archetypes. You have your crusty old sea dog that sticks up for Ray, the friendly cook and the one guy that's constantly dubious of Ray no matter the situation. None of them are all that engaging on a dramatic level and their one-note nature clashes with the somber tone of the movie. And as you can probably imagine it's hard to become emotionally invested in this perilous rescue when the inhabitants Bernie is trying to save aren't remotely interesting.

Add to all that is the recurring subplot of Bernie's fiancee Miriam (Holliday Grainger) that sticks out as extraneous during the film and even moreso after the film is done when one can examine the plot as a whole and realize her going-ons don't contribute much at all to the movie. All she does is eat up more screen time in a film whose runtime is in desperate need of some whittling down. The Finest Hours also comes up as a mixed bag in terms of visual effects, with shots simply depicting the various boats in the middle of the large and foreboding ocean looking really swell. Then a shot of the human character standing in front of outdoor backgrounds at sea comes up and Lordy does it look bad to the point that such moments never failed to take me out of the movie entirely.

Probably the best aspect of The Finest Hours is Chris Pines lead performance, even though the script doesn't give him much to work with. Still, Pine, masking his voice in a thick New England accent, does carry a presence that immediately conveys him as the sort of determined fellow who fits in well as the lead of this particular story. I just wish he got more to do (and some dialogue to deliver that wasn't grating), though The Finest Hours fails him in that regard and also manages to come up short in plenty of other ways as well.