Independence Day: Resurgence Is A Repugnant Fusion Of Noise And Tedium 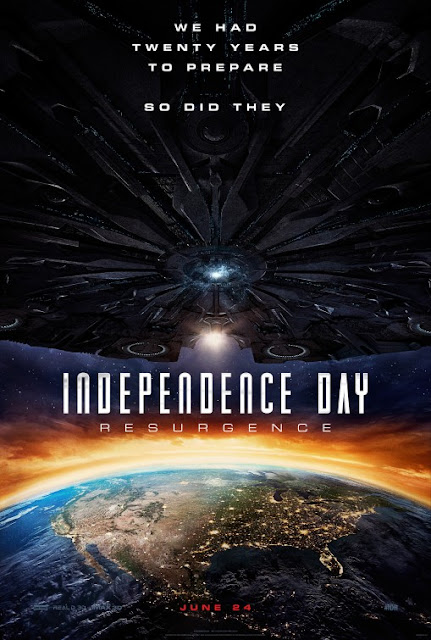 Sometimes you leave a summer blockbuster feeling elated, the imagery and characters on-screen having just about made one's day. Other times you leave with mixed emotions", not having despised what occurred but also certainly not enjoyed it. And then there's how I felt about upon leaving Independence Day: Resurgence, a movie that left me only feeling aggravation. By the end, of the motion picture, I felt a great kinship with The Grinch since  all of the chaos on-screen only registered to me as "NOISE! ALL THE NOISE NOISE NOISE!"

Director Roland Emmerich has returned to the Independence Day universe that launched his career into the stratosphere twenty years ago with all of the perfunctory spirit of a kid who has to visit a dentist he despises. Two decades have also passed in the universe of Independence Day, with the humans having picked up the pieces of the civilization that was wrecked by humanity. Alien technology has also been incorporated into everyday society to  allow for seemingly only fancy aircraft, weaponry and a monorail that wraps around Washington D.C. Seriously, the concept of alien technology being commonplace on Earth only results in the human characters carrying around bigger guns than they would in normal circumstances.

Will Smith's character has died in between movies and his son, Dylan (Jessie T. Usher), is around and he and Jake (Liam Hemsworth), a guy whose parents were killed in the last alien invasion, have a rivalry established early on in the movie that plays into the ensuing alien invasion in any way. Seriously, they don't gradually learn to trust each other, they just sort of come to terms with their differences abruptly. Jake is dating Patricia (a completely wasted Maika Monroe), daughter of former President Whitmore (Bill Pullman). Whitmore has been driven mad by his brief encounter with the aliens in the last movie, but his craziness dissipates once the plot requires him to be of a more stable mental state. Oh, and poor Jeff Goldblum hangs around in the background for much of it without getting much to do. There's also an African Warlord, a wimpy bureaucrat named Floyd, Jake's best friend, Bret Spiner and Judd Hirsch whose so separated from 95% of this movies story he feels like he's in another film altogether,  Despite the massive size of this overstuffed cast, they somehow couldn't figure out a way to bring back Harvey Fierstein.

It's apparent that Resurgence wants to mimic the ensemble cast of the first movie, but like most sequels, it tries to also be bigger than its predecessor in every regard and so we get a bunch of disposable individuals in this story that don't have very much reason to exist. Character arcs are basically non-existent and many times it's difficult to keep track of the various plot threads going on in the movie. It's all a bunch of overblown complexity not only done poorly, but it's all basically for naught. Even after the onslaught of characters and plotlines are introduced, none of them get satisfying resolutions. Then the stories climax finally rolls around and just boils down to "SHOOT THE ALIEN IN THE BACK!", which has absolutely nothing to do with the myriad of characters and their individual personalities (well, the ones who get discernable personalities that is) present in the story.

Even the sequences of mass destruction, the one aspect of Roland Emmerich's disaster movies that you can count on to show some imagination and fun even in his worst fare like The Day After Tomorrow, are big o'l piles of absolute nothingness. There are two super brief scenes to be found here that have the aliens wrecking shop on well-known American cities and they occur back-to-back in the span of about a minute. They're over as quickly as they came and then we spend the rest of the movie (sans the climax where everyone gets into jets and fight the aliens around Area 51 which is totally unlike the first movie) in an underground bunker as the humans try to figure out what to do and as the aliens slowly drill their way to the core of our planet. It should also be noted that these super-brief disaster sequences (sans a separate momentary plot detour showing Judd Hirsch attempting to outrun a wave caused by the alien attackers) contain no previously established characters that we can follow amidst the chaos, making it impossible to care about all of the carnage unfolding in the movie.

When even Roland freaking Emmerich doesn't seem to care about doing anything fun with the disaster sequences, you know your movies in deep trouble. Most of the other aspects of the movie, from the only so-so visual effects (man, the appearances of the aliens here really makes one yearn for the vastly superior animatronics in the previous film) to a forgettable score by frequent Roland Emmerich collaborator Harold Kloser, suffer from that same level of lack of imagination. Seriously, it's borderline disconcerting how little of worth there is to be found in the Independence Day: Resurgence. It's devoid of any sort of fun, even fun of the cheesy variety, it's got no likable characters to speak of, especially when it comes to newly introduced characters. Hell, it can't even deliver sequences of destruction that work on the basic level of "Oooooo, that's cool looking!". Worst of all, Independence Day: Resurgence gives Jeff Goldblum absolutely nothing of note to do, which may be the worst of its multitudinous flaws.
Posted by Douglas Laman (NerdInTheBasement) at 5:06 PM