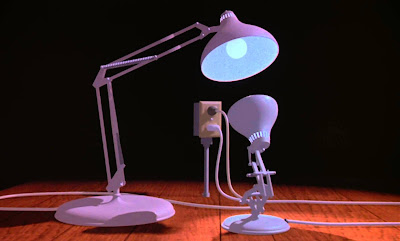 OK, last Friday I started out my examination of the short films of PIXAR by ranking all 17 of them (not counting short films starring characters from PIXAR movies) from worst to best. Today, we look at the 9 best PIXAR short films, starting with....

After starting his animated feature film career at Warner Bros. Animation animation duties on The Iron Giant and Osmosis Jones, Sohn started working for PIXAR with Finding Nemo and has been a consistent presence at the studio since. Not only has he voiced notable supporting characters in Ratatouille and Monsters University, he also directed the 2015 feature The Good Dinosaur. Sohn got his directing sea legs with the 2009 short film Partly Cloudy, which has clouds creating babies and handing them off to storks to deliver, with one cloud in particular creating baby versions of dangerous animals that prove hazardous for one frazzled stork. There's loads of fun animation to be found here and the dynamic between the shorts two lead characters is surprisingly well-developed in a short span of time.

Perhaps the most slapstick-heavy PIXAR short film at the time of its release, Lifted has a teenage alien being taken out for his first test human abduction while a stern instructor watches and judges. The gelatinous extraterrestrials have a colorful look and some fun sound effects to further their visually memorable nature. Plus, the script is obviously having a ball applying a more comedic sensibility to the concept of aliens abducting human, particularly in coming up with new ways to toss the human that's being abducted around like a ragdoll.

A snowman trapped in a snowglobe wishes to party with other knick knacks, notably one pretty lady. It's a simple concept that allowed the PIXAR artists in their budding days to once again anthropomorphize comedic objects to humorous effect. The short (which has a score by Bobby McFerrin, believe it or not) also is notable for its script that skillfully conveys the desires of its lead character and carrying a Chuck Jones-esque knack (pardon the pun) for all of the crazy ways the little snowman attempts to escape his confines. 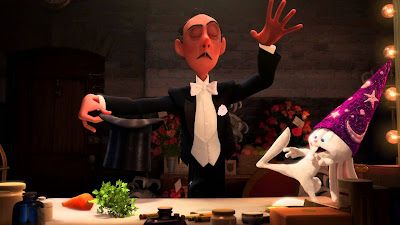 Presto may be the most deceptively simple feature in the PIXAR short film canon. Its premise of a magician's rabbit refusing to cooperate with his owner during a magic act until he gets a carrot seems like prime fodder for a slapstick-heavy PIXAR short. But it's the tiniest intricacies in this movie that really help it come alive, especially in the animation. If Knick Knack had shades of classic Looney Tunes cartoons in its brief flashes of escalating absurdity, Presto goes whole hog with paying homage to those classic pieces of animation.  Notice the exaggerated movements of the magician and rabbit as well as the heavy emphasis on comedic physical movements. Those elements alone offer plenty of humor but then you have all of the uproarious antics perpetrated by the rabbit with the magic hat and it becomes something truly special.

They may be angry and cruel little boogers, but it can't be denied that the tiny birds that make up the majority of the cast of this short are absolutely adorable. Those little birds and their ostracization of a bigger clumsier bird results in one of PIXAR's funniest shorts, with the build-up to the inevitable payback against the snootier tiny birds being splendidly built up. Also; excellent sound work on the chirping on the birds, with the tinier fowl getting squeaks and the larger avian creature getting a large honking noise to compliment his more awkward demeanor. There's a lot of thought going into the short (notice how each of the original tiny birds who land on the telephone wire have clear individual personalities), but above all else, For The Birds is just a hoot and a half.

Hand-drawn animation and computer animation collide in this clever short from Teddy Newton. Personifications of the very concepts of night and day meet for the first time and both experience quarrels and euphoria over discovering the others existence. It's an abstract concept that nicely handles universal themes of stumbling upon the unknown and embracing the different. The script (also by Newton) makes great use of the visual and humor opportunities presented by its two unique leads in what's easily a film quite unlike anything else in the PIXAR short film canon. 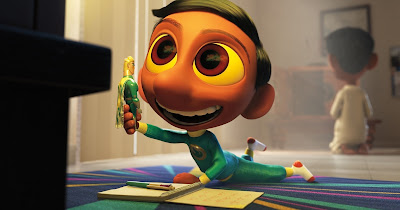 For many of these PIXAR short films that have been examined in this piece, slapstick comedy has been the name of the game. That's not at all a bad thing inherently, especially when it results in exceptional creations like Presto and For The Birds. But variety is the spice of life as they say and PIXAR struck their best short film in nearly two decades with Sanjay's Super Team, perhaps the most complex short in terms of narrative ever released by the studio. Under the direction of Sanjay Patel, this feature centers on a young boy named Sanjay, who loves an animated American superhero show, and his resistance to partake in a Hindu exercise that his father is adamant he participate in. From there, Sanjay's imagination takes flight and reimagines the various deities as superheroes.

Sanjay's Super Team is actually inspired by tales from the director's childhood and that personal touch shines through in this impeccably created production. From a story perspective, the father-and-son dynamic that rests on differing cultural upbringings, is set up properly in a short span of time without feeling rushed while the animation inside Sanjay's superheroic fantasy is a colorful sequence quite unlike anything else crafted by PIXAR. And that emotional conclusion? The perfect way to end a spectacular short film that serves as an excellent showcase for the kind of storytelling possibilities offered by this medium of filmmaking.

As a youngster, I was always terribly confused as to why Geri's Game didn't directly tie into the film it was attached to, A Bug's Life. That youthful perplexity aside, Geri's Game is an excellent slice of PIXAR short film goodness, taking the concept of an elderly man playing an intense game of chess with himself and wringing all of the potential comedy out of it. Lots of good editing in this one and the animation does a strong job differentiating between the two versions of the titular chess player in body language and composure. Its lack of concrete connections to A Bug's Life may have left me puzzled as a kid, but even at a young age I could tell that Geri's Game was something truly special.

That little PIXAR lamp made its debut in this short film that was attached to Toy Story 2 more than decade after it was originally created. This was how I first was introduced to one of PIXAR's earliest short films, as well as one of its simplest in terms of story structure and, most importantly, also the best short film made by PIXAR Animation Studios. It's an impressive achievement how the parent/child dynamic between the larger and smaller lamp are effectively conveyed not just without dialogue but even without facial expressions. Simply their body movements and actions in the short say all that needs to be said about motivations and emotions. Luxo Jr. paved the way for PIXAR using the concept of lending human emotions to common household objects in future movies like Toy Story, but even taken on its own merits, it's still an impressive achievement 30 years after its initial creation just how effective it is. The overall simplicity and sparseness that came out of the limitations of computer animation technology of the time manage to inspire some of its most creative aspects.
Posted by Douglas Laman (NerdInTheBasement) at 8:28 AM