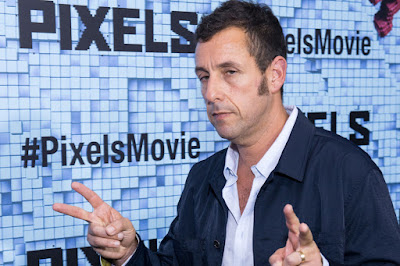 I've seen Adam Sandler fight Pac-Man. I've seen Adam Sandler use super-speed to disarm a one-eyed Will Forte. Hell, I've even seen the guy actually give a fantastic performance in Paul Thomas Andersons Punch-Drunk Love. Yes, I've witnessed Sandler do many different things in his..."comedies". But there is a recurring motif in his projects that he never directs but typically writes. Hell, even in films he has no hand in screenwriting this recurring aspect of his work always pops up. The movies Adam Sandler typically stars in have a major tendency to treat women the same way the actor treats the very concept of comedy; very very very poorly.

The majority of the comedy found in the works of Sandler seems to be an extension of observational comedy, though that form of humor typically utilizes jokes to shed light on everyday pain and turmoil. For Sandler and his cronies, jokes are frequently used to "observe" elements of human beings that differentiate themselves from Sandler (namely race, gender and weight) and mock them mercilessly. In their review of That's My Boy (a film I haven't seen, thank God), RedLetterMedia critic Jay Bauman took note of how Sandler's movies typically come off like schoolyard bullies in their more-often-than-not cruel unfunny humor, a perfect description of the comedy that makes up the majority of the "jokes" in the man's work.

This is where the shoddy treatment of women in these movies comes up. Just as the mocking humor of Sandler's movies seems like it's distilled from a 10-year-old bully, his movies perceptions of women have a similar sense of pervasive immaturity about them. Women in Adam Sandler motion pictures are not there to drop jokes, inhabit memorable characters or even help move the plot along. No, women typically either serve as eye candy (mainly this duty falls to pretty supermodels to fall all over Sandler's characters to prove how "awesome" he is), dutiful wives with minimal dialogue (I bet even Katie Holmes forgets she was in Jack & Jill), prizes for Sandler and/or his co-stars to receive just before the credits roll or to serve as the source of mockery because they don't conform to an extremely narrow view of what Sandler and his writers consider "pretty".

If you at all deviate from such that perception, ooo boy, take cover. The movies of Adam Sandler will use you like a comedic punching bag as frequently as Nickelback makes excruciatingly bad music. As Adam Sandler's filmography grows in numbers, this constantly poor treatment of women goes from being just "troubling" to unhinged madness. After the ten month stretch where the misogyny-filled Pixels, The Ridiculous Six and The Do-Over have been unleashed unto the masses, it seriously feels like Sandler and the recurring screenwriters (like Tim Herily) behind these movies have long-standing issues with women and are getting "payback" against the entire gender in their films. Underneath the fart jokes and piss-poor scripts is this borderline terrifying streak of anger against every woman unfortunate enough to walk across this man's path. If she won't be his love interest, she's only good enough to be a source of mockery or objectification.

Now, women are far from the only frequent target of abuse in these Adam Sandler comedies. The physically deformed, the overweight and especially racial minorities (let's not forget the whole Native American debacle on the set of The Ridiculous Six) also get battered around in these feature films. Hell, the very concept of same-sex intimacy is treated as the height of hilarity in Pixels and The Do-Over alone. But women do tend to be the most frequent targets of horrifying misogynistic treatment in these motion pictures. That doesn't negate other individuals treated cruelly by these films of course, it just serves to show how fervently the Happy Madison production company keeps the well of insenstive jokes towards women going in the same manner that PIXAR emphasizes the importance of a good story.

Is there a deeper reason behind why women get so mistreated in Adam Sandler's vast catalog of cinematic garbage? Well, it strikes me that this recurring misogyny in the actors work is less of a carefully calculated conspiracy against women and a symptom of where all of Sandler's comedy emerges from; immaturity. Hell, Sandler's initial breakthrough sketches on Saturday Night Live relied on this element, namely The Thanksgiving Song which derived much of its humor simply by combining simplistic lyrical structure with a mish-mash of random 70's and 80's pop culture references and sexual phrases. That's a combo he's utilized endlessly in his feature films since and he hasn't deviated from the formula in his comedies at all.

Whereas other comic filmmakers like Adam McKay and Edgar Wright use their works to say something meaningful while also delivering belly-laughs, the folks behind these Adam Sandler comedies have no introspective wit to speak of. His movies are defined by stagnation fueled by immaturity and that results in any female character unlucky enough to exist in these movies to be treated in such a limited manner. The writers behind these movies can't even begin to imagine treating women like actual people because that would go against the strain of immaturity that defines these movies. Their "consistency" has resulted in a disturbing amount of frequent misogyny in these movies that makes them as hard to watch as any grisly horror movie. Considering the middling box office of Sandler's last few movies, it seems like even Adam Sandler's most dedicated fans have grown out of his schtick.

There are too many signifiers in Adam Sandler's work that blatantly showcase the sort of lazy craft that goes into the likes of Grown Ups 2 and Jack & Jill. But the treatment in these movies goes beyond just lazy screenwriting, it's like the movies serve as a way for the screenwriters (a group that frequently includes Sandler) to write a scathing screed against everyone in that very gender. This all culminates in Sandler's most recent project, which ramps up the misogyny to insane heights. Hell, the film's climax involves David Spade beating up Paula Patton while whining about how women are always pushing him around. It's perplexingly tone-deaf garbage that encapsulates the kind of abysmal treatment women receive in films starring this pathetic excuse for a comedic leading man.
Posted by Douglas Laman (NerdInTheBasement) at 9:04 AM