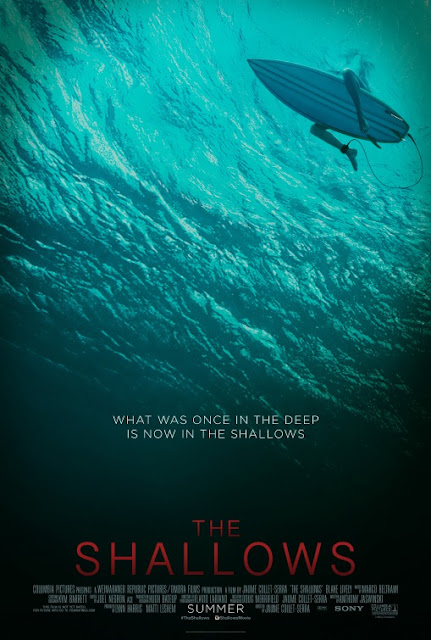 Ever since Steven Spielberg ushered in the age of the summer blockbuster with Jaws, sharks have been synonymous with big dollars in the world of pop culture. Sharknados are the rare piece of bad weather that people love and Shark Tale was one of last decade's most thought-provoking examinations of overtly sexualized aquatic wildlife and what happens when animation studios try to cash in on the success of Finding Nemo. The Shallows is the newest attempt to turn sharks into a license to print money and the strong box office returns for this Blake Lively feature suggest such a goal has been achieved.

In addition to make a bunch of cash for Sony Pictures, The Shallows actually delivers surprisingly well as an appropriately small-scale thriller. Plus, it allows Blake Lively to get a leading lady turn that allows her to shine. Perhaps 2016 will go down as the year that the two leading actors of 2011's wretched Green Lantern movie (Ryan Reynolds and Blake Lively) got to spread their wings and prove their acting worth. Lively plays Nancy, a woman whose struggling with Medical school and has come to a beach that her Mother adored to forget her worries. The way The Shallows gets across this backstory for Nancy is quick (the movie smartly keeps itself short, running under 90 minutes) but some of the dialogue used to get this information across is distractingly clunky.

Anywho. sun and surf are on the menu, but she soon finds she's not alone in the water. There's also a shark out here, one that has its eyes set on Nancy, After chomping on her leg and leaving her with a mighty wound, Nancy finds herself stranded on a tiny island (if it can even be called that) in the middle of the ocean, with no phone or other way to communicate to the world that she's in dire need of help. Now she's just got to use her wits to survive against this aquatic creature whose relentless in his pursuit of Nancy and anyone else who dares to come into the water. A simple set-up to be sure, but the streamlined nature of the story is one of its best assets. I especially appreciate that there's no greater reason for the shark to be in this location other than "he's hungry", the film doesn't feel the need to toss in an extraneous subplot involving nefarious humans tossing a shark into this part of the ocean to attack Nancy, for example.

Instead, The Shallows opts to just tap into that universal fear of sharks, which stems from not only the dangerous appearance of said animals (all those teeth!) but also being trapped in an environment, the water, where we'd be easily outmatched by that ferocious beast. The Shallows actually gets some fun mileage out of making sure that that nefarious shark isn't the only aquatic foe Nancy has to face in her quest for survival. Elements of underwater life that we all typically think of as tranquil (like coral), perfect fodder for a lovely screensaver, turn out to pose their own dangers for our protagonist to endure.

Blake Lively takes the reins as the lead of this project (her second starring role in the span of 14 months following last year's The Age Of Adeline) and fares quite well portraying an everyday personality trapped in perilous circumstances she could have never imagined. It's a nice touch from a screenwriting level to have elements of her conventional personality seep through even as the going gets tough, namely in the name she gives a seagull whose also trapped on this tiny island thanks to a physical injury. Speaking of the script though, it should be noted there's a couple of contrived plot elements that feel like they could have been avoided to an easy degree. To boot, the ending, without getting into spoilers, feels like it's a bit too organized and clean-cut.

It doesn't rewrite the book in terms of thrillers, but I did find myself surprisingly absorbed by The Shallows which really does tap into universal fears of sharp-toothed water critters and utilize a sharply written no-frills narrative to their maximum potential. Plus, it'll keep a whole new generation of moviegoers wary about going into the water when they inevitably head to the beach this summer, which is the ultimate goal of any shark motion picture.