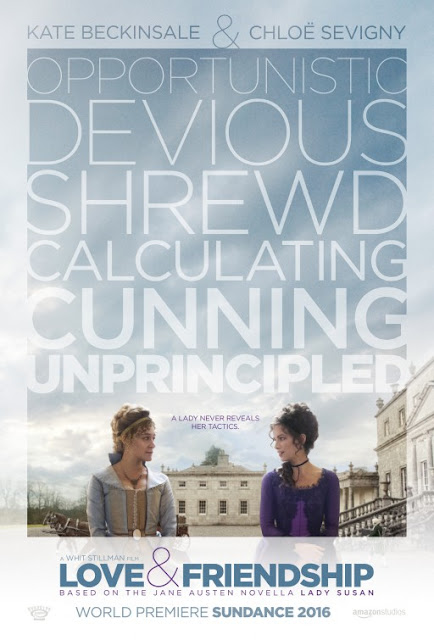 Let it not be said that Love & Friendship skimped on its shooting locations because the various locales that its large cast inhabit are mighty impressive. Ditto for the costumes of the movie, which are a colorful cavalcade of time period appropriate (the film takes place in the 18th century) outfits that are absolutely glorious, major kudos to costume designer Elmer Ni Mhaoldomhnaigh (who frequently works on notable European set projects like Calvary) for her stunning work here.


All of those visual flourishes are in service of the tale of Lady Susan Vernon (Kate Beckinsale), a woman whose as manipulative as the day is long. Her efforts to control her daughter Frederica (Morfydd Clark) and basically any other human being who crosses her path gives her quite the reputation, a reputation not thought of as a positive by many. Still, that doesn't deter Susan or her various pursuits, as she always manages to be the one with an ace in the hole, if you will, no matter the scenario.

Love & Friendship (adapted from a Jane Austen novel) applies itself to a simpler plot structure that at times feels more episodic than anything else despite the game efforts from its cast and Kate Beckinsale in particular. It doesn't help that the supporting cast of characters tend to all blend together, which makes it harder to really become invested in what's occuring on-screen. One notable departure from this flaw is James Martin (Tom Bennett), a naive fellow who provides some of the biggest laughs of the entire feature. His fascination upon discovering peas (which causes him to bat around the tiny vegetables with his fork the same way a cat tosses around a ball of yarn) at a refined dinner is a particular highlight.

Beckinsale is also a highlight as Susan Vernon. Every time she walks into a room Beckinsale immediately sells the subtle mannerisms necessary to depict how Susan is always plotting, always conniving just under the surface. This characters mind never stops working like this and Beckinsale pulls of depicting that aspect of her personality quite well in addition to display some solid comedic chops with her various observations on the folks around her and her own innocence regarding postage related faux pas.

The rest of the cast, like I said, isn't truly remarkable, which brings down the film considerably considering it's entirely a character driven comedy made up of extended dialogue sequences. Whit Stillman's OK but not exceptional directing also doesn't help keep the sometimes flailing pace from improving. But hey, at least there's two great performances from Beckinsale and Bennett, some ravishing costumes & sets as well as some mighty fine jokes to make Love & Friendship an overall amiable but not all too memorable movie.
Posted by Douglas Laman (NerdInTheBasement) at 10:19 AM