A Look At The Short Films Of PIXAR (Part One)

Next week, PIXAR Animation Studios releases their seventeenth motion picture, Finding Dory. And with said movies release comes the unveiling of a new short film entitled Piper. At this point, short films accompanying each new PIXAR movie is a grand tradition that started with A Bug's Life and hasn't ceased since. To tie into the release of Finding Dory and Piper, I've decided to examine the PIXAR short films by ranking them from worst to best in a two part essay series. Just a heads up before we go ahead, I have decided to look at only short films that aren't spun-off from PIXAR movies, so no Cars Toons or BURN-E to be found here.

Following in the footsteps of recently released Disney animated shorts about budding love like Paperman and The Blue Umbrella, here came a tale about two volcanoes, one (the center of the tune) a male volcano who yearns for someone to "lava". This is one of the rare PIXAR shorts to utilize dialogue and boy howdy does it make one yearn for the silent movie antics of Geri's Game and For The Birds a minute or two into its runtime. It's gorgeously animated to be sure, and the Somebody To Lava tune is catchy, but it just feels so rudimentary compared to its brethren. Doesn't help that the designs of the volcanoes resorts to eye-rolling obvious gender archetypes (the male volcano is large while the female is uber-skinny).

This tiny motion picture probably has the simplest plot of all the short films PIXAR has ever made, mainly because it was created primarily to see what they could do with the realm of computer-animation more than anything else. Thus, character designs are simple and there's not so much of a story here as there is one brief encounter between a blue individual and a potentially hazardous bee. Far from bad, it's still more of a relic of the past than a satisfying short in its own right.

Is this the darkest short in the canon of PIXAR short films? Perhaps and it's also likely one of the most obscure titles ever commissioned by the studio, never being attached to one of their movies likely because of its more dour tune. Centering on a lonely red unicycle and his dreams of being in the circus, this short, coming right off the heels of Luxo Jr., was another attempt to anthropomorphize a common household object to considerably less successful results. There's just not enough meat on the bones of Red's plight thematically to warrant audience sympathy. Kudos for the darker tone, but this one doesn't quite come together, even if the fact that it was the production that got Disney animation legend Frank Thomas to see the storytelling virtues of computer-generated animation lends it a definite place in the history books. 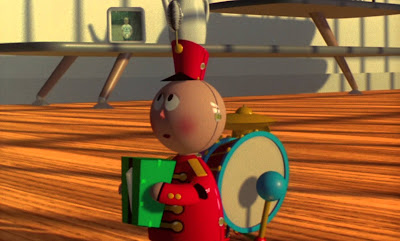 Before there was Toy Story, there was Tin Toy, PIXAR's first foray into the world of toys coming to life. This is one of those short films (like Red's Dream and its creepy looking clown) where the storytelling ambitions of the PIXAR artists were overshadowed by the technology of this era. Here, a baby intended to garner audience sympathy (particularly at the end when the lead character, Tinny, realizes the true purpose of a toy is to be a child's friend) just looks so stiff and eerie throughout. Decent stuff for sure, but with the benefit of hindsight its biggest accomplishment by a country mile is being a precursor to the vastly superior Toy Story saga.

La Luna has a lovely storybook quality in its visuals (is it just because of the outer space setting that it reminds of The Little Prince?) and a sweet spirit in its message of finding common ground between differing generations. However, it doesn't quite have the laughs or bigger emotional punch that the better PIXAR shorts carry and the character designs feel derivative. Namely, the dad in this story looks distractingly like Flint Lockwood's father in the Cloudy With A Chance Of Meatballs movies while the Grandfather, with his long white beard, is as cookie-cutter of a visual representation of an elderly individual as I've ever seen. 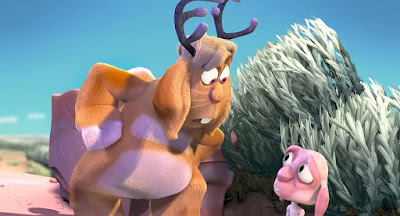 Here comes another one of PIXAR's rare dialogue heavy short films, this time centering on a sheep hopelessly in love with his own appearance until a man comes along and shears him, leaving without the fluff that covered his body and brought him such joy. A jackalope soon comes alone to offer encouraging pieces of advice. There isn't too much to this one in terms of visuals (considering it came out a year-and-a-half prior to Cars, I wouldn't be surprised if this one's barren desert environment served as a testing ground of sorts for the location of Radiator Springs in that 2006 PIXAR film), but it is a sweet little adventure with a fine message of keeping one's spirit afloat in times both good and bad.

It's astonsihing how far PIXAR has come in terms of the level of realism seen in their computer animation and few pieces of work from the studio exemplify how far they've come than The Blue Umbrella. Compare this to The Adventures Of Wally And Andre B. and you'd be forgiven for thinking they'd been made on different planets. Thankfully, there are other aspects of The Blue Umbrella to appreciate beyond just its lovely visuals, with a plot that overcomes its slightly derivative nature (The Blue Umbrella premiered three months after Paperman debut and it's impossible not to see the similarities between the two) with an irresistible sense of sincerity and a fantastic score from Jon Brion.

For about four short films in a row, PIXAR seemed to take a cue from their Academy Award winning 2000 short film For The Bird and makes more slapstick reliant short features. It's hard to complain about the similarities between the four shorts since they all turned out rather well and, as you almost certainly guessed, One Man Band is one of those aforementioned four short movies. There's some superb character design work here in the two one man bands competing for a little girl's golden coin. The short has a lot of fun with the sense of escalating showmanship between the two musicians and its ending is particularly amusing.

OK, come Monday I'll take a look at the remaining nine short films PIXAR has made! I'll see ya then!
Posted by Douglas Laman (NerdInTheBasement) at 9:04 AM