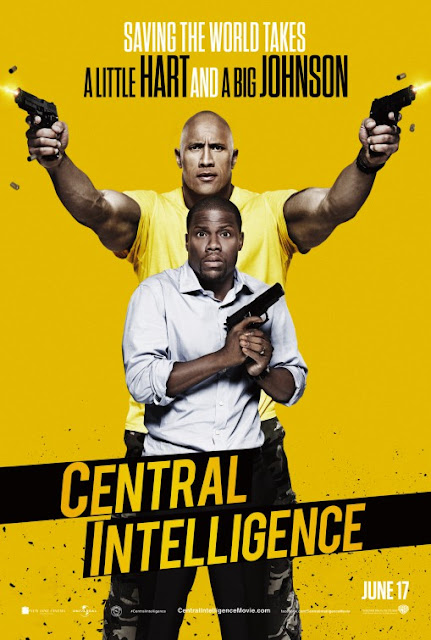 For all of Dwayne Johnson's accomplishments in his career (one of which includes finally becoming a viable leading man with last summer's San Andreas after box office non-starters like Faster and Hercules), the charisma and charm that got him this far as world renowned celebrity are on full display in his turn as Bob Stone in Central Intelligence. Playing a dude who was a portly misfit in high school whose grown up into a naive super-assassin, Johnson always carries a smile on his face and tosses his entire being into the role. He's a hoot-and-a-half turning a pretty rote archetype (specifically the dude who looks like a conventionally hyper masculine individual that has similarly conventionally feminine interests) and breathes new vibrant life into it.


Stone is one-half of this movies lead duo, the other figure in that equation being Calvin Joyner (Kevin Hart) the lead character of the movie, a super popular guy back in High School who feels like his life is going nowhere. His mundane existence is throw into chaos when Bob re-enters his life, at first seemingly just wanting to catch up on the years since High School and proudly display his fanny pack to Calvin. All good stuff, but Bob has more on his mind than just catching up. You see, Calvin is an experienced accountant and Bob needs those accounting skills of his to take down a terrorist figure named The Black Badger.

From there, Central Intelligence attempts to weave a conspiracy laden plot about who the Black Badger really is and could Bob Stone actually be this shadowy figure of doom? That plot point is the movies central downfall, since the story bends over backwards to try to keep the audience in dark over who Calvin really can trust. Problem is, it's obvious who the real antagonist in this whole ordeal is and the film never does anything interesting or unique to compensate for its formulaic story. Overly convoluted and predictable is not a good mixture for Central Intelligence and it's really a shame that it distracts from the elements that do work.

Among those successful aspects is the rapport between the two leads. Kevin Hart has struggled in his previous starring vehicles to really channel his distinctive motor-mouthed personality into a believable character and making him a buttoned-up every-man turns out to be a solid solution to this problem. Hart gets to keep doing his dialogue and comedic timing driven gags while portraying an individual that doesn't overwhelm the story or his partner, Dwayne Johnson. Like I said, Johnson's a real treat in his turn as Bob Stone and him and Hart play off each other mighty well. For the first time ever, I'm intrigued by that Jumanji remake since it'll reunite the two actors.

It'a shame that the script keeps going for the aforementioned predictable discount Jason Bourne espionage stuff, since just watching Johnson and Hart bounce off each other turns out to be a lot of fun. Watching Dwayne Johnson talk about his love for unicorns and randomly vanishing and re-appearing to other characters befuddlement? Awesome! Watching poorly staged action sequences also starring Dwayne Johnson? Less awesome. Director Rawson Marshall Thurber seems weirdly unwilling to use some wide shots or more coherent editing in any of the combat scenes of Central Intelligence, muting the intended awesomeness of watching Dwayne Johnson beat up some bullies.

Central Intelligence carries a rote script that leaves a lot to be desired in terms of story structure. It's also not very visually compelling and, like many modern day comedies, it does feel overlong running at 114 minutes. But damn it, those two leads are a lot of fun and Dwayne Johnson certainly brings it his all in creating a chipper bad-ass whose always wearing a grin and a fanny pack. Central Intelligence leaves a lot to be desired in certain crucial areas, but where it does excel it does so with pizzazz.  Brace yourself for an extremely scattershot and formulaic screenplay and some surprisingly solid laughs.
Posted by Douglas Laman (NerdInTheBasement) at 8:33 PM