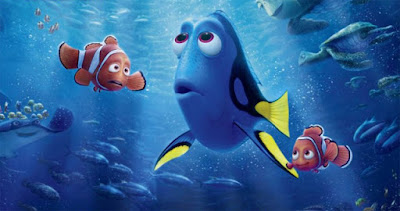 Of their past sixteen movies, PIXAR has managed to launch all but two of them (the underperforming Cars 2 and the money-loser The Good Dinosaur) into varying levels of box office stardom, ranging from the solid hauls of A Bug's Life and Brave to the monster blockbuster levels of Toy Story 3 and Finding Nemo. Now it looks like they're up to fifteen box office smashes after this past weekend, which brought their newest release, Finding Dory, to a massive $136.2 million opening weekend, by far the biggest opening weekend for an animated movie (beating out the $121 million debut of Shrek The Third nine years ago).

But that's not where the victories end for Finding Dory, as it also scored the second biggest opening weekend ever for a movie opening in June, behind only the $208 million haul for Jurassic World, the sixth biggest opening weekend ever for a Disney feature (behind only four Marvel movies and a Star Wars feature) and almost doubling the opening weekend of the original Finding Nemo film from 13 years ago. Oh, and it's already the third biggest Underwater movie of all-time only behind Shark Tale and Finding Nemo. As for how it's gonna hold up, it wouldn't be shocking to see it hold like Monsters University in the weeks to come and do 3.25 its opening weekend thanks to a ton of family movie competition in the weeks to come and the fact that, being a long-awaited sequel, a large portion of its audience likely already saw it.

If it did end up doing 3.25 its opening weekend though, it would end up grossing over $440 million, which would be just enough to propel it past the $441 million cume of Shrek 2 from twelve years ago to make it the biggest animated film of all-time domestically. As for why this one did so well, I don't think it's a mystery. People absolutely loved the first one, especially the character of Dory. A sequel centered on her adventure to find her parents basically worked like gangbusters as a way to get moviegoers of all ages into multiplexes around the world. It didn't hurt that critical reviews were overwhelmingly positive, more so than recent PIXAR sequels like Cars 2.

Right behind Dory was the new Kevin Hart/Dwayne Johnson vehicle Central Intelligence, which grossed a solid $34.5 million over the weekend, narrowly above the bows of past Kevin Hart starring vehicles like Think Like A Man Too, Get Hard and just below the debut of Ride Along 2. This had the potential to become a bigger sleeper hit, but the more mixed response to Hart's last few movies may have diluted the well a bit. Plus, reviews weren't quite positive enough to get unsure moviegoers to give it a shot.

Luckily, the weeks ahead are wide open for Central Intelligence. Bizarrely, there are no new comedies opening in wide release over the next two weeks, including this years 4th of July frame. It wouldn't be shocking if this ended up doing quite a bit over three times its opening weekend, especially since audiences liked what they saw judging by that A- CinemaScore. If this gets over $100 million domestically, it'd be the third title ever Kevin Hart to do so (following Scary Movie 3 and Ride Agong) and the ninth ever (not counting The Mummy Returns) for Dwayne Johnson.

In its second weekend of release, The Conjuring 2 had a much steeper second-weekend decline than its predecessor, losing 61% for a second-weekend sum of $15.5 million, bringing its domestic cume to $71.7 million. Even with that hefty decline, this new Conjuring adventure should have no trouble crossing $100 million domestically. Similarly, Now You See Me 2 had a much greater plummet than the first Now You See Me adventure, with this new installment dropping 57% for a second-weekend sum of $9.6 million and a ten day total of only $41.3 million. But both of those movies still held tremendously better than Warcraft, which became only the ninth movie in history to be playing in over 3,000 theaters and still lose over 70% from its first weekend of release. In this frame, it grossed a minuscule $6.5 million (a 73% decline from last weekend) for a domestic total of only $37.7 million. This one's probably gonna lose a ton of theaters next weekend to make way for four new wide releases, so it may even be a gamble if this thing even gets over $50 million domestically.

Those Ninja Turtles didn't get much of a break this week, as they suffered another steep weekend-to-weekend decline, losing another 64% for a third weekend gross of only $5.2 million. These heroes in a half shell have only grossed $71.9 million in 17 days and will likely end up somewhere between $85 and $90 million domestically, a more than 50% drop from the domestic sum of the last Ninja Turtles movie. X-Men: Apocalypse lost another 47% this go-around, grossing another $5.2 million taking its domestic gross to $146 million, putting it only $400,000 behind the final domestic gross of X-Men: First Class. We shall see if it can outdo the $157.2 million domestic cume of the first X-Men movie from sixteen years ago. Meanwhile, Me Before You dropped 54% this frame to add another $4.1 million to its domestic haul that now stands at a solid $46.3 million.

Alice Through The Looking Glass actually had by far the smallest weekend-to-weekend decline in the top 12, losing only 36% for a fourth weekend gross of $3.6 million and a domestic cume of $69.3 million. Captain America: Civil War rounded out the top ten by dropping 47% for a seventh weekend gross of $2.3 million and bringing its domestic haul to $401.4 million, making it the first movie of 2016 to cross $400 million domestically.  Right outside the top ten The Angry Birds Movie plummeted 64% in the face of newbie animated family movie Finding Dory, grossing only $1.7 million and the film has now grossed $103.3 million.

The Top 12 this weekend grossed $225.8 million, an 8% decline from last year when Jurassic World ruled in its second weekend and fellow PIXAR release Inside Out debuted to record-breaking numbers.
Posted by Douglas Laman (NerdInTheBasement) at 10:42 AM