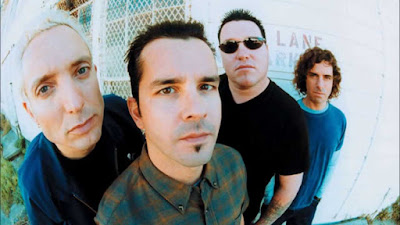 The 1960's had The Beatles. The 1970's had many of Queen's greatest hits. The 1980's had a bevy of hugely successful music ranging from Aerosmith to Journey. And among the biggest musical acts at the tail end of the 20th century and in the first few years of the 21st century was...Smash Mouth. A band that's mainly a punchline today and has only released one album since 2006. From 1997 to sometime around 2002 though, man, these guys were everywhere. They tapped into the zeitgeist of the era like fee bands at the time did. In fact, I'd argue their work was so linked to the era in which they were produced that it's hard for their music to work in a modern context. Not only is there not a whole lot in terms of vocals or interesting lyrics to take in, but it truly feels like only in the brief era in which they were so popular could they have flourished so greatly.

At the dawn of the 21st century, my generation was being raised on self-confidence and acceptance as the order of the day. It wasn't like past generations had had childhoods full of grimness and a bleak outlook, but the parents of this age were determined to ensure that their offspring grew up with their ambitions as high as the stars. "You can be anything you want to be!" they'd declare and in the year 1999, here came Smash Mouth bounding onto scene with their fifth single All-Star, which proclaimed the listener to be "...a rock star..." and urged them "to get the show on, get paid".

Even a cursory glance at the full lyrics of All-Star reveal the words that make up the song to be pure nonsense. Greg Camp's lyrics start out with an anecdote about being told his lack of intellect will lead to him not going anywhere in life, but his optimistic attitude and willing to embrace anything has led him to having confidence anyway. There's no arc for him in the song and the one time he encounters another individual in the song (a fellow who wants some change for gas) leads to him just stringing some words together that culminate in an extended delivery of "cha-a-a-a-nge" by singer Steve Harwell that would have made David Bowie cringe. Harwell delivers all of the lyrics in a manner that's unique but also renders the majority of the words in the tune borderline incoherent. As a kid, I always wondered why someone had an elf on their forehead only to later learn that the song was actually referring to someone placing their fingers, arranged to resemble an R, on their forehead.

But who cares? It was a song with a singer whose voice was unlike anything else on the radio and it showed up in Shrek! Yeah, Smash Mouth getting their work prominently featured in Shrek really cemented their place as a force to be reckoned with in the world of music, especially with kids who were growing up in the age of "You can do anything!" being hammered into their heads, a mantra that All-Star aligned with perfectly. Their other notable song in that 2001 animated family comedy, I'm A Believer, was a cover version of 1966 song from The Monkees, but it basically cemented the type of songs the group would be known for; high-energy tunes that delivered optimistic messages that promised easy answers for life's complex answers were just waiting to be discovered. Considering their massive popularity, you'd think there would be some deeper substance lurking underneath surface of these songs, but there's really not. The tune All-Star, for instance, is obviously expressing a message of how awesome the listener of the song is, but the rest of the lyrics border on being simply gibberish.

Now, Smash Mouth finding success isn't exactly a shocking idea, even conceptually. Popular music being peppy and conveying upbeat messages? Stop the presses, right? Smash Mouth was basically following the footsteps of nearly every other noteworthy American pop music artists in the regard of delivering the sort of easy-going music with non-challenging messages that are easy for the masses to consume. But Smash Mouth was even more limited in terms of the topics they'd cover than the typically famous American pop music band. Even prior to Shrek launching them into the stratosphere, tunes like Walkin' On The Sun and a cover of the 1975 War song Why Can't We Be Friends reinforced the themes that would be more than well-trodden ground for the group in a few years time. Their limited amount of topics to cover in their music made them a perfect fit at the end of the 90's and the dawn of the 21st century when their pro-"anything's possible" anthem was resonating with kids, but it also ensured their downfall. They were a one trick pony whose trick had extremely limited appeal.

By the time their fifth album was released, the blood was in the water. The December 2005 release, The Gift Of Rock, failed to chart on the Billboard 200, a chart they had cracked the top fifty of just four years prior and had even snuck all the way up to the number eight slot with their second album in 1999. The kings of pop music descended to being paupers almost as quickly as they ascended to being musical royalty. It didn't help that the sequels to Shrek, the movie that brought the band to new heights of fame, failed to include the band in the numerous Shrek sequels aside from All-Star popping up in the Shrek 2 trailers and their 2006 single Story Of My Life being featured in the Shrek The Third trailer. When even Shrek didn't seem to want anything to do with Smash Mouth, why should general listeners be any different?

Even more damaging was how the group failed to expand the types of concepts their songs covered, which can be crucial for any singer/band looking to keep their career sustainable over multiple years. Just look at how Taylor Swift, another singer who has a massive following with youngsters, managed to incorporate new experiences she went through as she got older into her more recent albums and singles. So what you will about her, but the 2016 single Out Of The Woods has a far different vibe to it than her 2010 single Fearless. As previously stated, Smash Mouth just didn't have much else up their sleeve beyond the likes of All-Star and their career suffered greatly for it. Things got so bad that one of the four founding members of the band, guitarist and writer of notable songs like All-Star Greg Camp, left Smash Mouth in 2008.

Smash Mouth, still retaining two of its four founding members Paul De Lisle and lead singer Steve Harwell, still tour across the country and have only released on album since 2006. In recent years the band's only real return to the pop culture spotlight came last June for all the wrong reasons. Some rowdy concert-goers spurred Harwell into a massive profanity-filled rant at a concert at a Colorado food festival. There is something oddly sad in seeing the lead singer of a band once known for singing songs about his fans were "All-Stars" most famous escapade in modern times consist of him engaging in rage fueled antics against his listeners. It's a classic rags-to-rich-back-to-rags-again tale, the kind you see countless amount of times in the music industry.

Looking back on their discography in an extensive fashion, there's really not much of note to be found in the works of Smash Mouth. Some of the beats in their songs are memorable enough earworms, I guess, but it becomes quickly apparent that these guys latched onto one singular concept that worked really really really really well once (the idea of real life being a pain but you, an ordinary joe/jane, are really awesome and can find happiness) and just ran it absolutely into the ground. How their work and especially pop culture impact relates to their era of release is far more fascinating to me than all of their songs combined. Plus, their 1998 single Can't Get Enough Of You Baby is one of the most misguided love songs I've ever heard of and is almost equally as fascinating on its own merits as a musical trainwreck. Seriously, listen to this and imagine some music executive approving it to be released to the unwitting masses: