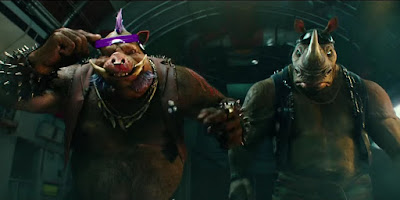 In their sixth theatrical film outing, the Teenage Mutant Ninja Turtles found their newest movie, Out Of The Shadows, doing meh business domestically, with an opening weekend substantially lower than its immediate predecessor. Out Of The Shadows had an opening weekend of $35.2 million, which is 46% lower than the bow of the 2014 Ninja Turtles outing, making this the third weekend in a row (following Neighbors 2 and Alice Through The Looking Glass) where a sequel has opened to 45+% less than its predecessor.

Not to become a bragging Barry or anything like that, but the reasons I listed out in my Summer 2016 Box Office Predictions for why this movie could underperform pretty much came true (let's just forget for a moment that I vastly overestimated the box office appeal of Alice 2, Neighbors 2 and The Nice Guys, shall we?). The first Teenage Mutant Ninja Turtles movie from two years back flourished like other live-action/CGI adaptations of decades-old properties like The Smurfs and Garfield thanks to a potent combo of nostalgia and the novelty of seeing beloved characters in a manner like you've never seen them before.

But just like the original Smurfs and Garfield movies, the 2014 TMNT film didn't generate much goodwill from audiences at all. And just like Smurfs 2 and Garfield 2 experienced sharp drops at the box office from their predecessor, so did this new Ninja Turtles movie. The nostalgia itch has been scratched and the novelty is gone. New villains presented in ads for Out Of The Shadows (like Krang and Bebop & Rocksteady) may have held some appeal for fans of the 90's cartoon, but they weren't gonna lure in general audiences solely based on their presence.; With no compelling plot or action conveyed in the marketing, not to mention reviews that weren't much better than the 2014 TMNT movie, it's easy to see why this one failed to gain much traction at the box office. With steep competition arriving in the weeks to come, Out Of the Shadows will likely fade into the...well, you know.

In second place was X-Men: Apocalypse which suffered a massive 66% decline for a second-weekend sum of only $22.3 million. taking its domestic gross to $116.5 million. Now, that's only a 2% larger of a second-weekend dip than X-Men: Days Of Future Past, sure, but Apocalypse had a 28% smaller opening weekend than DOFP. The second-weekend dip of Apocalypse is on par with the decline of X-Men: The Last Stand and if it continues to play like that 2006 mutant adventure, it would wind up with only $150.6 million domestically, which is only 3% ahead of the domestic cume of the 2011 X-Men: First Class, which did not have 3D ticket prices boosting its grosses.

Newcomer Me Before You found itself in third place with a solid $18.2 million sum. That's 48% of the opening weekend of last summers Paper Towns and 20% ahead of the opening weekend of If I Stay. In fact, Me Before You impressively had the twelfth biggest opening weekend ever for a romantic drama. Considering the small $20 million budget for Me Before You, this is a noteworthy success and the first real sleeper hit of the summer. The complete dearth of romantic dramas in the marketplace certainly didn't hurt this movies performance and the two lead actors, while not being A-list talent, are certainly recognizable (Emilia Clarke from Game Of Thrones and Sam Claflin from the last three Hunger Games movies) enough. If this plays like fellow early June released romantic drama The Fault In Our Stars in the weeks to come, it would gross about $49 million in the US. Since it was considerably less front-loaded over the weekend than TFIOS, it wouldn't be a shock to see Me Before You go higher than that in its domestic run.

Last weekends big Memorial Day box office loser, Alice Through The Looking Glass, grossed $10.6 million this weekend, a 60% decline. That's considerably larger than the 46% dip Alice In Wonderland had back in March 2010. This new Alice adventure has grossed $50.7 million in ten days and seems destined to end its domestic run just above or below $75 million. Rounding out the top five was The Angry Birds Movie, which isn't holding as well from weekend-to-weekend as the majority of computer animated family comedies. This weekend it lost 50% for a third-weekend haul of $9.7 million and brings its domestic gross to $86.6 million. With Finding Dory on the way in two weeks, there's not much longevity in Angry Birds future, though it'll at least get over $100 million domestically with ease.

Just outside of the top five was Captain America: Civil War, which declined 51% from last weekend for a fifth weekend gross of $7.5 million. Civil War has now grossed $388.9 million domestically and over $1.1 billion worldwide. In seventh place was Neighbors 2, which continued to trail its predecessor by a considerable margin, The Seth Rogen/Rose Byrne vehicle grossed $4.7 million (a 51% decline from last weekend) this weekend taking its small domestic cume to only $48.5 million, meaning its 17 day gross now puts it at the same level as the first movies opening weekend.

Coming in at eighth place was another R-rated Universal released comedy, Popstar: Never Stop Never Stopping which grossed  a minuscule $4.6 million. Astonishingly, that's a smaller opening weekend than the debut from the last film from the Lonely Island crew, Hot Rod, which opened to $5.3 million nine years ago. Even with summer weekday grosses at its beck and call, it's pretty much a guarantee this won't clear $10 million domestically.

In its eighth week of release, The Jungle Book continued to rake up cash, grossing another $4.2 million (a 40% decline from last weekend) to bring its domestic haul to $347.4 million. Meanwhile, The Nice Guys rounded out the top ten with a $3.5 million cume, a 46% drop from last weekend. This Shane Black action/comedy has now grossed only $29.1 million domestically. Meanwhile, Love & Friendship went into wide release this weekend (expanding its theater count to 819 locations) and grossed an additional $2.1 million, bringing its domestic gross to $7 million. This Whit Stillman movie will become the directors biggest movie ever sometime during the week and should finish its domestic run just south of $15 million. Finally, The Lobster expanded its theater count to 560 theaters to solid results, grossing $1.5 million for a per-theater average of $2,768. The Lobster has now grossed $3.6 million in the US, making it the tenth biggest movie ever for indie movie studio A24.

Oh, one last thing to mention, Zootopia crossed the $1 billion mark this weekend, becoming only the second original movie (after Avatar) cross such a threshold and only the fourth animated film ever to get over $1 billion. A majorly impressive coup for one of the years biggest surprise success stories.

The top 12 this weekend grossed $124.6 million, a 4% decrease from this same weekend last year and the lowest gross seen by this frame since 2002.
Posted by Douglas Laman (NerdInTheBasement) at 7:38 AM