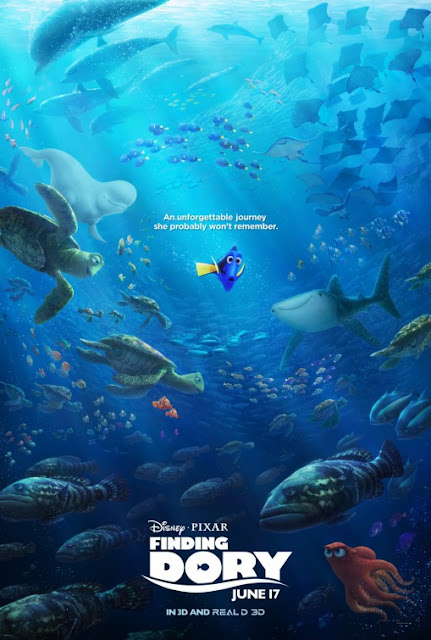 There's been some understandable apprehension lobbed at the slate of future movies emerging from PIXAR Animation Studios, namely in the fact that three of the four films the company will be releasing until the end of the decade are follow-ups to existing motion pictures. It's easy to see why such a feeling exists, not only because I've felt it time after time again, but also because the studios output has included features like Up, WALL-E or Inside Out whose basic premises seemed to defy conventional family-friendly American animation routines. To now see Cars 3 and Toy Story 4 on the horizon from a studio championed for its originality can't help but leave one with a tad bit of disillusionment.

Then again, PIXAR's past tracked record with sequels is surprisingly solid; out of the four sequels they've made prior to 2016, three of them have ranged from "really good" to "AMAZING!" (and then there's Cars 2, the one we shan't speak of). Well, their tally of sequels made rises to five with the release of Finding Dory and thankfully their amount of successful sequels also manages to be elevated with the existence of this Finding Nemo follow-up. What seems like a nakedly blatant attempt to wring a few bucks out of the brand of its predecessor actually has more going underneath the surface than you might expect.

Finding Dory opens with, well, Dory (Ellen DeGeneres) living with Marlin (Albert Brooks) and Nemo, with one of the films most interesting plot threads cropping up in this early sequence. Finding Dory does not sugarcoat the concept of living or frequently interacting with someone with a developmental disability; it's tough work, can be trying, it's all not just a garden of roses. The film doesn't vilify Dory in any way, no no, but it does show the trials she and those around her have to go through on a daily basis due to her short-term memory loss. It's a smart way to make Dory a viable protagonist for this adventure, a sharp contrast to the last time a PIXAR sequel upgraded a comic relief sidekick to leading man status in Cars 2.

One seemingly routine day, memories of Dory's parents are spurred from her mind and now she's off to go looking for them with Marlin and Nemo in tow. It turns out they're located in a Marine Biology Institute in California, where Dory gets separated from Marlin and Nemo. From here, the trio must try to find Dory's parents in an environment completely unfamiliar to them. This plot structure that splits up the trio allows for the three characters to interact with a horde of new characters. There's another charm about Finding Dory, it resists just bringing back characters from the first movie just for the heck of it. Instead, plenty of new instantly lovable creations pop up, the best of which may be some sea lions voiced by Dominic West and Idris Elba.

While Finding Dory should be (and is in this review, don't worry) assessed on its own individual merits, the well-known nature of the animation studio it hails from compels me to answer a query many of you may have regarding where it stands in the pantheon of the 17 feature films released by PIXAR. In short; pretty well. It's not at the level of Up, Ratatouille, the first and third Toy Story or even its own immediate predecessor. Its plot isn't quite as tightly constructed overall as some of the best PIXAR films while the new supporting character Hank The Octopus (Ed O'Neill) might be too much of a curmudgeon for his own good. His defining trait is that he desires to be alone and not have to deal with other people, but there's no good reason given for why he has this compulsion so it becomes harder to root for the guy. He's got some lovely animation and a decent dynamic with Dory, but he could have used some more depth in his crucial introduction scenes.

Otherwise though, Finding Dory is quite the polished production whose most sterling accomplishment may be in finding a way to turn supporting character Dory into an effective main character. Treating her short-term memory loss in a more realistic manner is a major reason for why she works so well as a protagonist, and going hand-in-hand with that element of her personality are the well-handled flashbacks to her childhood with her parents. Anything with young Dory in this movie is gold, especially an opening scene that transitions from tranquil to tragic without missing a beat. Expanding on her desire to be "home" from the first movie (remember that from her monologue in that underrated scene where she breaks down after Marlin thinks Nemo died?) is a shrewdly clever move to ensure her character can sustain a feature film while feeling organic with her appearance in Finding Nemo. Even more impressive is that they manage to reverse-engineer memorable facets of Dory's personality from the first movie into major clues about her upbringing, something that at first struck me as akin to finding out Anakin Skywalker built C-3PO, but in execution in the movie itself works quite well and even functions as some smart screenwriting.

It should also be noted that the presence of more hefty emotional content for Dory doesn't displace any of the comedic chops she possessed in Finding Nemo, with Ellen DeGeneres getting plenty of time to shine in the spotlight with another excellent vocal turn. Similar props in terms of comedic voice-overs need to go to Ty Burrell as a plucky beluga whale and those territorial sea lions wonderfully voiced by Dominic West and Idris Elba. Finding Dory may not reach the heights of the best PIXAR movies, but there's no denying that it's got plenty of imagination, pathos and humor to make it a natural extension of the original Finding Nemo and a worthy film on its own merits. Hopefully future sequels from PIXAR (and there are plenty of those on the way) have this level of care put into their story and emotional arcs.
Posted by Douglas Laman (NerdInTheBasement) at 9:10 AM