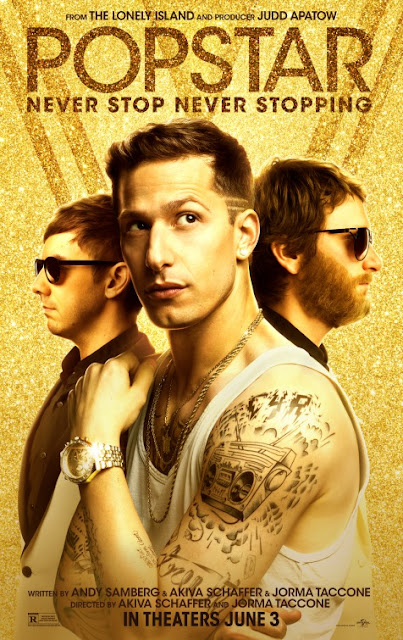 The Lonely Island has experienced massive success in terms of album sales and their music videos going uber-viral, so it's kind of bizarre how poorly their motion picture ventures have fared at multiplexes across America. Nine years ago Hot Rod became a major box office misfire and their second movie, Popstar: Never Stop Never Stopping, has somehow fared even worse despite factors like inflation and the groups increased exposure in the years since Hot Rod. It's a real shame Popstar isn't faring well at all financially, but the good news is that this newest movie is yet another runaway success from the comedic music group.

For Popstar, The Lonely Island has decided to utilize the musical talents that made them such runaway hits on Saturday Night Live for a faux-documentary chronicling the life and times of Conner4Real (Andy Samberg), a superstar singing sensation that was formerly one of the three dudes in a boy band named The Style Boyz. One of the other two members of the band, the cheerful and agreeable to a fault Owen (Jorma Taccone), now works as Conner's DJ while the other member, Lawrence (Akiva Schaffer) is a reclusive farmer.

Conner has become an egomaniac in his time as a solo artist and those selfish tendencies of his are only exacerbated as a storm of unfortunate events occur, namely the sales of his new album plummet, just as a massive world tour of his gets underway. Popstar obviously is taking a cue from comedies like Anchorman that center the plot on an unsavory character whose redemption arc becomes the framework of the plot. The films that pull off this type of storytelling (like the first Anchorman) can achieve some truly unique comedy while other motion pictures that fail to hit the mark (like the second Anchorman and the forgotten 2013 dud The Incredible Burt Wonderstone) are just unpleasant to experience.

Luckily, Popstar is easily in the first category of feature filmmaking, with Conner being an enjoyable comedic presence despite his unsavory tendencies. Presenting the movie in documentary style of filmmaking certainly helps our lead character be more bearable, since the motion picture frequently takes the time to interview the numerous supporting characters or real life celebrities. This has the effect of Conner never overstaying his welcome in the plot, while Andy Samberg's performance also does a fine job of crafting a surprisingly true-to-life egomaniacal personality driven by both social media and the adoration of others.

Nestled within the screenplay, penned by The Lonely Island, is a seemingly never-ending supply of meticulously created jokes. Particularly impressive is the range of gags found in the feature, with some (like an extended spoof of TMZ) relying on modern day pop culture references, others (such as a violent wolf attack) relying on plain o'l absurdity and still others finding plenty of fun in just well-timed lines of dialogue. Popstar never settles for just running one type of comedy into the ground, it's looking to bring together an all-you-can-eat buffet of jokes from all corners of the comedic globe. "Variety is the spice of life" as they after all and that's an axiom Popstar lives by to noteworthy success.

I'd be remiss to discuss the humor of Popstar without highlighting the various songs that Conner belts out throughout the movie. Comedic tunes have been The Lonely Island's bread-and-butter for over a decade now and they more than come through in the memorable pieces of music that crop up here. The various absurd subject matters that the songs cover (which include, but are not limited to, a song dedicated to the humble nature of Connor and a woman wanting to be seduced in a manner reminiscent of how Osama Bin Laden was killed) provide excellent fodder to be brought to life by Samber's superb vocals and thoughtfully produced lyrics. I haven't been able to get any of these songs out of my head since I saw the movie, though that's far from a complaint. Popstar: Never Stop Never Stopping is certainly not taking the box office by storm, but don't let that dissuade you from checking out this gem of a movie ASAP. It's the sort of mixture of laughs and music that would make the likes of Weird Al proud.
Posted by Douglas Laman (NerdInTheBasement) at 12:34 PM