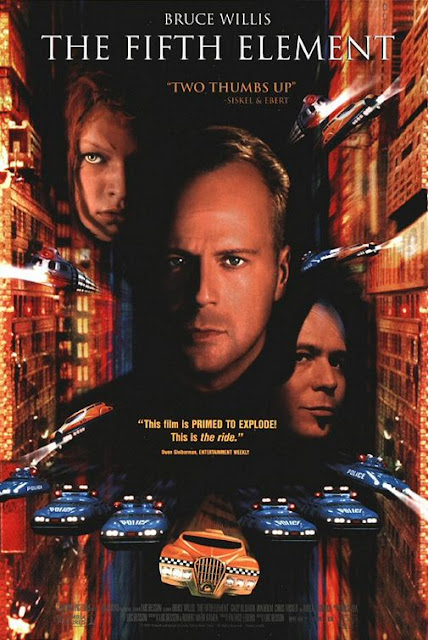 The Fifth Element is a walking-talking contradiction of a movie when it comes to its story. Namely, it's a film stuffed to the gills with characters, concepts and mythology, all of it newly created (it's not based on a toy, comic book, TV show or previously existing source material). There's so much going on, yet, it all flows as seamlessly as a peaceful river. All of the various subplots co-exist in entertaining harmony, one of the many positive aspects of The Fifth Element that makes it such an exciting and memorable adventure.

An apocalyptic threat is speeding towards Earth and threatens to wipe out every human being on the planet. All looks hopeless, but Father Vito Cornelius (Ian Holm) knows of a way to stop this impending doomsday event. Five elements, when placed together in a certain spot in Egypt, will be able to use their combined power to save humanity. The fifth of these elements (hence the title) is the recently awakened Leeloo (Milla Jovovich), while the other four elements are hidden somewhere in the cosmos. Leeloo's chance encounter with cab driver Korben Dallas (Bruce Willis) soon embroils the down-on-his-luck driver to get involved in the mission to find the other four elements and save the human race.

Oh, and in addition to all of that, the nefarious Southern-accented Jean-Baptiste Emanuel Zorg (Gary Oldman) is also after the Five Elements and will stop at nothing to gain possession of them. And there's also a group of shapeshifting aliens also in the mix looking for some revenge against Zorg after he double-crossed them. And Chris Tucker's in there as a hyperactive space celebrity. Like I said, there's a lot going on here, but it's a remarkably light on its feet production all the same. Each character does serve a clear purpose in the narrative and the obvious fun screenwriters Luc Besson (who also directs) and Robert Mark Kamen are having creating this dense universe is most infectious.

Bruce Willis got his career lifted off into the stratosphere with his turn as John McClane in Die Hard, a role he enhanced with his everyman demeanor that he brings into the part of Korben Dallas. It's a stroke of genius to have Willis and his normalcy soaked personality be the grounded audience POV character for this crazy story, since Willis can easily convey that specific temperament in no time flat. Plus, it's fun to see that disposition clash with all of the insanity occurring around him. It's one of those casting choices that's smart on multiple levels and serves as one The Fifth's Element's smartest ideas.

In terms of actors though, it's Milla Jovovich that runs away as the movies MVP. I've been unfamiliar with this woman's work prior to The Fifth Element (the Resident Evil films have passed me by) but good Heavens is she superb here. Playing a character devoid of knowledge of English or the human race, Jovovich balances a sense of curiosity and fear even in the most subtle parts of her physical and verbal performance. Leeloo, when examining the narrative as a whole, has to serve as the heart and soul of the movie, and thanks to strong writing and Milla Jovovich's equally strong performance, she fulfills this role to a tee.

Other actors (like Chris Tucker, Ian Holm and especially Gary Oldman) appropriately ham it up amidst some extremely lovely looking sets. That's another notable aspect of The Fifth Element that stands out as unique, the design of the futuristic city and buildings (which reminded me aesthetically of Blade Runner). Major advancements have been made in technology, but it all retains one step in reality by making things looking dingy or lived-in, similar to how the original Star Wars trilogy made its own brand of sci-fi environments stand out. There's a lot of consume just in the background details of the sets of The Fifth Element (let alone its packed script) but it's all so effortlessly crafted and structured such density of materials never becomes a hindrance.

Oh man, if Luc Besson's 2017 return to sci-fi storytelling, Valerian And The City Of A Thousand Planets, is even a tenth as good as The Fifth Element, we should be in for a helluva treat.
Posted by Douglas Laman (NerdInTheBasement) at 1:25 PM