Conjuring 2 Possess The Box Office While Warcraft Is A Domestic Bomb, Some Audiences See Now You See Me 2 And Ninja Turtles Have Hefty Second-Weekend Dip 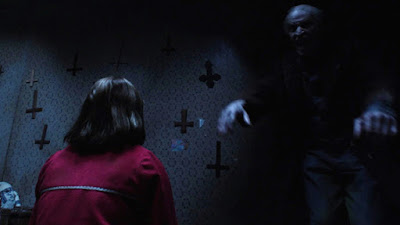 After three weeks in a row where major sequels underperformed, Hollywood got that "sequelitis" slightly cured with a solid bow from The Conjuring 2. Just like the likes of Neighbors 2, Alice Through The Looking Glass and TMNT: Out Of The Shadows, The Conjuring 2 opened below its predecessor, but only by 4% for a domestic opening weekend of $40.3 million. That's about 8% above the opening weekend of the Conjuring spin-off Annabelle and 19% bigger than the bow of The Purge, another R-rated horror film that debuted in June three years ago. Plus, it grossed $50 million in its first overseas frame, about double what the original took in in its first foreign frame.

It's not rocket science why Conjuring 2 comparatively flourished where the likes of Alice Through The Looking Glass or spring 2016 duds like The Huntsman: Winter's War and Allegiant failed; The Conjuring was a very well-liked movie by general audiences and the occupation of The Warrens as paranormal investigators means introducing another story about spooks into the previously established world would be natural in the marketing than the more forced ad campaigns for Neighbors 2 and God's Not Dead 2 that basically said "Look! It's the same thing again for some reason! Give us your money!" The Conjuring 2 got an A- CinemaScore, an exceptionally good score for a horror film, and with no new horror movies opening up for another three weeks, not to mention it holding rather well over the weekend, this one might hold on decently in the weeks ahead and will very likely get over $100 million domestically.

In second place was another newcomer, Warcraft, which scrounged up only $24.4 million in its opening weekend. That's 33% below the debut of Pacific Rim, 19% below the bow of John Carter and even 5% below notorious box office dud Fantastic Four's opening weekend. Basically, yeah, this was a big loser here in the US. The marketing campaign for this one was (let's not beat around the bush) absolutely abysmal, failing to convey the fantasy world to general moviegoers unfamiliar with the video game that spawned it in a successful way. There were no notable names in the cast to speak of (aside from Paula Patton), the second trailer was so bad Warcraft director Duncan Jones distanced himself from it immediately and the reviews were some of the worst seen for any major studio release this year. It was a collision of bad events that resulted in an abysmal opening that's one for the record books in all the wrong ways.

That being said, the film is truly making up ground internationally, particularly in China where Warcraft has become something of behemoth financially. It grossed $145 million in the country in its first four days of release and is all but guaranteed to end its run there north of $250 million. While the severely bad domestic box office must sting for Legendary Pictures and Universal, it should be noted that the astousnindg numbers in China and solid grosses in other foreign territories like Russia seem to be pointing to a worldwide box office total of around $450 million when all is said and done for Warcraft. That's nowhere near enough to be labeled a "hit", let alone get a franchise going, but on a $160 million budget, well, there's been worse big-budget underpeformers, that's for sure.

Now You See Me 2 managed an OK $23 million over the weekend, a decline of about 21% from its predecessor's opening weekend. That's a smaller opening weekend dip than the ones experienced by the far more high-profile new adventures of the X-Men and the Ninja Turtles. The first Now You See Me stuck around awhile at the box office, eventually doing four times is opening weekend. This new magician adventure won't have anywhere as good of legs at the box office, though its less front-loaded nature of the weekend suggests it could hold decently over the next few weeks. It's still nearly impossible to imagine it cracking $75 or even 70 million domestically though and on a $90 million budget that ain't very good. Better hope those foreign numbers end up being spectacular.

Teenage Mutant Ninja Turtles: Out Of The Shadows lost 58% in its second frame for a gross of $14.8 million. That's a slightly larger second-weekend drop than the first movie (which lost 56% in its second frame two years back) despite a considerably smaller opening weekend. Paramount had hoped Out Of The Shadows would gain back ground after its underwhelming debut by playing out in the coming weeks more like a family movie, which typically means smaller weekend-to-weekend declines. Instead, the movie seems more frontloaded like typical fanboy fare and with only $60.2 million in the tank ten days into its run, it'll probably end its domestic cume at around $90 million.

Me Before You lost 50 % for a second weekend gross of $9.2 million. That's much smaller than the 69% plummet of The Fault In Our Stars in its second weekend, and with no other romantic dramas in sight, the film has a good shot at playing well in the weeks ahead. Me Before You has now grossed $36.8 million in ten days. X-Men: Apocalypse suffered another hefty weekend-to-weekend decline this go-around, losing 56% for a $10 million third weekend. Apocalypse has now grossed only $136 million in seventeen days. Meanwhile, in its fourth weekend of business, The Angry Birds Movie had its smallest weekend-to-weekend decline, losing only 34% for a $6.7 million cume. These enraged fowl have now grossed $98.1 million and will likely take a big hit when Finding Dory opens this weekend. It should be noted that The Angry Birds Movie will cross $100 million this week, becoming only the second video game movie (following the first Laura Croft feature) to do so domestically.

Alice Through The Looking Glass lost 51% in its third weekend,  grossing only $5.5 million and taking its meager domestic gross to $62.4 million. This is another title that will likely get hurt by the presence of Finding Dory. Meanwhile, Captain America: Civil War came in at ninth place, taking in another $4.4 million, a 43% drop from last weekend, bringing its domestic cume to $396.8 million. Steve Rogers newest adventure should cross $400 million domestically by Friday. Popstar: Never Stop Never Stopping failed to make up ground in its second weekend of release, plummeting 63% from its minuscule opening weekend to gross an additional $1.7 million, bringing its domestic cume to only $8.3 million. I highly recommend those of you who haven't seen this one yet do so ASAP as it is highly unlikely the film will still be playing very many theaters by the time Friday rolls around.

Love & Friendship added seven theaters this weekend and had one of the best holds of any wide release, losing 29% to gross another $1.5 million, taking its domestic gross to $9.5 million. Fellow May 2016 arthouse release The Lobster added $991,984 (a 32% decline from last weekend) to take its US haul to $5.1 million. Both held quite well this frame and while their runs are winding down for sure they are both shaping up to be some of stronger arthouse titles seen this year thus far. Meanwhile, Maggie's Plan added 277 theaters this weekend, taking its location count to 311 and grossing another $690,592 for a per-theater average of $2,221. This Greta Gerwig led comedy has now grossed $1.1 million domestically.

The top 12 this weekend grossed $145.7, down about 45% from last year when  Jurassic World made "a little bit" of cash. It's worth noting that, despite the hand-wrining in the press over the prospect of recent sequels not doing so well, not only did The Conjuring 2 do great business this weekend but Finding Dory is about to come out and has a good shot at claiming the biggest opening weekend ever for an animated movie (that record currently belongs to Shrek The Third and its $121 million bow).
Posted by Douglas Laman (NerdInTheBasement) at 10:32 AM