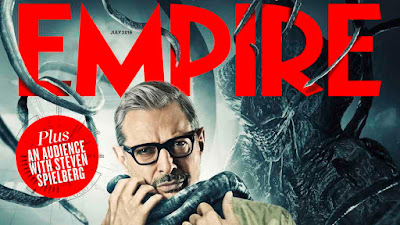 It's apparent at this point that Finding Dory is experiencing strong word-of-mouth, and even with new family movies The BFG and The Secret Life Of Pets opening up in the next two weeks, it appears to have a strong enough presence to withstand family movie newcomers in the marketplace. Barring a massive plummet in the weeks ahead, Finding Dory should get past the $441 million cume of Shrek 2 to become the biggest animated film ever domestically, not accounting for inflation.

In second place was a far less successful summer 2016 sequel, Independence Day: Resurgence (which will henceforth be referred to as ID4: Resurgence in this article). This Roland Emmerich movie became the latest sequel to severely underperform this summer, grossing only $41.6 million over its opening weekend, a 17% decline from the $50.2 million bow of the original ID4 film. It also received a B CinemaScore from moviegoers, which is really worrisome as far as summer blockbusters go. Other "beloved" blockbusters that received the same score include Pixels and Batman v. Superman.

It's not hard to see why audiences were underwhelmed with the movie (the audience I saw it with on Friday were bored and restless to a discernable degree) considering its lack of action and memorable characters. Don't be shocked to see this one vanish from theaters in the weeks ahead and it may even narrowly miss the $100 million mark domestically. The dismal word-of-mouth from critics and audiences basically sunk a movie whose marketing campaign already came off as overly derivative of the first film without offering a distinct reason to why the world of ID4 was continuing twenty years later.

Central Intelligence shed 48% from its opening weekend, grossing an additional $18.3 million taking its domestic gross to $69.3 million. That's not the best dip in the world (it's slightly higher than the 46% decline Spy had last year) but it's still a decent enough hold. It does look like the film will be able to cross $100 million domestically when all is said and done, a pretty good result for the $50 million budgeted action-comedy.

The surprise of the weekend could be found in fourth place this weekend, where The Shallows prospered with $16.5 million. This small-budget feature (it only cost $17 million) blew past all expectations, thanks to there not being anything quite like it in the marketplace and some really well-cut trailers. Tom Rothman, the Chairman over at Sony Pictures Entertainment, must be pretty pleased with this result too considering this was one of the first films he greenlit when he took over the position of Chairman at the studio in February 2015.

Something else I wanna bring up is how 55% of the audience who saw The Shallows this weekend were women. Interestingly, fellow surprise summer 2016 overperformer Me Before You also skewed towards women, with 81% of its opening weekend audience being women. So did The Conjuring 2, where women made up 51% of the audience of that films debut weekend. And the biggest movie of the summer, Finding Dory, had women making up 55% of its opening weekend audience. It's not shocking that in a summer where a number of the most high-profile features reduce women to being damsels-in-distress and/or rewards for male characters (howdy ID4: Resurgence!), eye candy (well hello Megan Fox in a schoolgirl outfit for no reason in the new Ninja Turtles movie) and even one film having a cornerstone of its marketing showcase a woman being choked by the bad guy (hey there X-Men: Apocalypse!), movies that market themselves as having women as active lead characters tend to prosper. Now, that's not the only reason these films or any movie flourished (if that's all it took Alice Through The Looking Glass would have broke the bank) but it should come as a clear sign to Hollywood studios that movies that feature women heavily aren't automatic box office poison. In fact, making films like the aforementioned summer blockbusters (all of which have underperformed severely it should be noted), whose marketings carry problematic gender-related imagery and/or footage, can face financial hardship at the domestic box office, since it basically paints a "NO GIRLS ALLOWED" sign on those motion pictures posters that can limit your potential audience greatly. Not to mention the fact that recent titles like The Hunger Games movies, Mad Max: Fury Road and Star Wars: The Force Awakens prove that big-budget American blockbusters can be made with active female leads, so why should female moviegoers settle anymore for movies whose marketing seems deliberately disinterested in their presence?

Looking at all this box office data, I'll conclude by saying don't be shocked if that new Ghostbusters movie next month turns out to be another female led movie that prospers at the box office.

Rounding out the top five was the third of the four new releases that arrived in theaters this weekend, Free State Of Jones. This Civil War set drama starring Matthew McConaughey turned out to be another box office dud for independent movie studio STX Entertainment, grossing only $7.7 million on a $50 million budget. McConaughey has rebounded in recent years considerably but his name alone isn't enough to guarantee big box office and the lackluster marketing for Free State Of Jones failed to garner audience interest. This dismal opening weekend and the large number of new releases opening in the U.S. over the next few weeks means this film won't be sticking around at the box office for long.

The rest of the top ten this weekend was comprised of holdovers. The Conjuring 2 fell 48% from last weekend grossing another $7.7 million for a 17 day total of $86.9 million. This one isn't having anywhere near the domestic box office stamina of its predecessor, but it is holding better than your average horror sequel and it'll still glide past $100 million in the US with ease and is raking up big numbers overseas. Now You See Me 2 fell 40% for a $5.6 million third-weekend gross and a 17 day total of $52 million. This title actually grossed a solid $43.3 million in China this weekend but that still doesn't erase the sting of this motion picture likely ending its domestic run around 45% beneath the domestic gross of the first Now You See Me.  X-Men: Apocalypse came in at eighth place, slipping 5e% for another $2.4 million taking its cume $151.1 million. It's still hard to say if this one will exceed the $157.2 million domestic gross of the first X-Men movie from sixteen years ago.

Rounding out the top ten was Teenage Mutant Ninja Turtles: Out Of The Shadows, lost 54% to the tune of a fourth-weekend gross of $2.4 million. These heroes in a half shell have only grossed $77.2 million in 24 days. Alice Through The Looking Glass came in at ninth place this weekend, grabbing another $2.14 million (a 50% decrease from last weekend), taking its domestic gross to only $74.5 million. Warcraft continued to lose steam at a whirlwind pace, plummeting 70% this weekend for a measly $2.13 million taking its small domestic gross to only $43.8 million. It's very unlikely this $160 million summer blockbuster tentpole will reach $50 million domestically, making it one of the year's biggest box office duds.Also just outside the top ten was the highest grossing live-action title of the summer thus far, Captain America: Civil War, which grossed $1.4 million (a 39% decline from last weekend) and brought its domestic gross to $403.8 million.

And now we come to the fourth new wide release of the weekend which...well, let's just say The Neon Demon didn't do so hot in its opening weekend. The newest Nicolas Wending Refn film had an abysmal debut this weekend, the second worst opening weekend for a 2016 wide release only behind The Bronze. Grossing only $606,594 this weekend, The Neon Demon is pretty much DOA, another box office dud for indie studio Broad Green Pictures that distributed the title for Amazon Studios.

The arthouse circuit was popping this weekend with a number of high-profile new films opening in limited release. The biggest of these was Swiss Army Man, which opened to a strong $114,000 from three locations for a per-theater-average of $38,000, the fourth biggest per-theater-average for a limited release in 2016. Swiss Army Man is going into wide release this weekend and it may just find itself prospering financially there as well. Hunt For The Wilderpeople, the new Taika Waititi film, opened to $60,000 this weekend from 5 locations for a per-theater-average of $12,000. which makes this the biggest opening weekend ever for indie movie studio The Orchard. Finally, fellow Amazon Studios release Wiener Dog debuted in two theaters to $26,000, grossing $13,000 in each locations.

The top 12 this weekend grossed $182.1 million, up about 2% from last year when Jurassic World was the biggest movie at the box office for the third weekend in a row.
Posted by Douglas Laman (NerdInTheBasement) at 10:20 AM